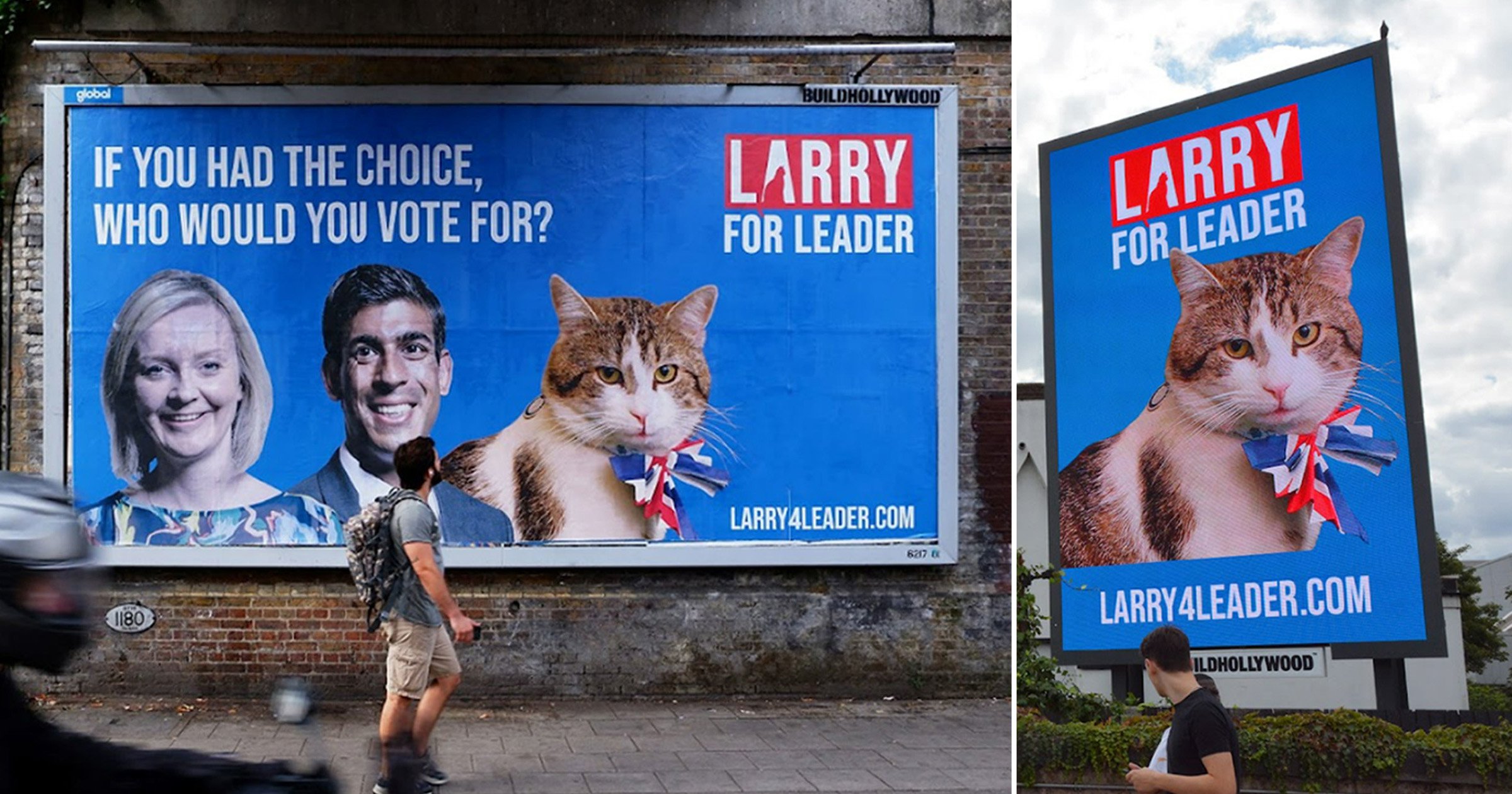 Supporters of Larry the cat have launched an unlikely bid to get him into Number 10 – as prime minister.

Downing Street’s resident mouser would have to stage quite the coup to pip frontrunner Liz Truss to the keys to his home tomorrow, but that hasn’t stopped his fans from putting up ‘Larry for leader’ billboards.

It is unclear if the mischievous tabby – often seen chasing pigeons and entertaining the press pack near Number 10 – is on board with the campaign, but his unofficial Twitter account branded it a dream come true.

Twitter users were also delighted to see the billboards pop up across London announcing that he has thrown his collar into the ring.

But this is not Larry’s first awkward appearance in the campaign.

Back in July, a child in Peterborough told Ms Truss that the cat should be PM, not her.

Either the Foreign Secretary or former chancellor Rishi Sunak will be declared the new leader of the Conservative Party on Monday, but the campaign team behind #Larry4Leader are on a last minute prowl to install a feline overlord instead.

The posters, featuring pictures of the 15-year-old cat and two human candidates, read: ‘If you had the choice, who would you vote for?

He was only four years old when he was adopted from Battersea Dogs and Cats home to begin his new life in politics and has served as a trusted companion to three prime ministers: David Cameron, Theresa May and the outgoing PM, Boris Johnson.

A tweet from Larry’s Twitter account with a picture of one billboard, featuring the cat in a Union flag tie below his slogan, has quickly accrued around 15,000 likes.

‘Dream come true,’ the account captioned it, along with the hashtags #Larry4Leader and #YesWeCat.

People were quick to spot the billboards, which have popped up in Hackney, Peckham and on Shepherd’s Bush roundabout.

Rebecca Rose, 32, shared the photo and said: ‘(Obviously) would vote Larry for leader (out of) the three’.

Ms Rose later tweeted about being handed a #Larry4Leader leaflet and wrote: ‘Now been handed this en route to work and I’ve got no choice but to Stan… Hackney central is really working overtime in support of Larry the cat here.’

Many also posted pictures of their own cats in response to Larry as a show of support.

‘We need clarity on all of your ‘paw’licies…’ another wrote.

The team in charge of the campaign, Don’t Panic, partnered with Build Hollywood to organise the billboards.

They specified what Larry stands for, including ‘responsible hiss-cal policy’ and ‘no lying in No. 10 unless it’s on a comfy cushion.’

Ministers gave Theresa May a plan for no deal Brexit