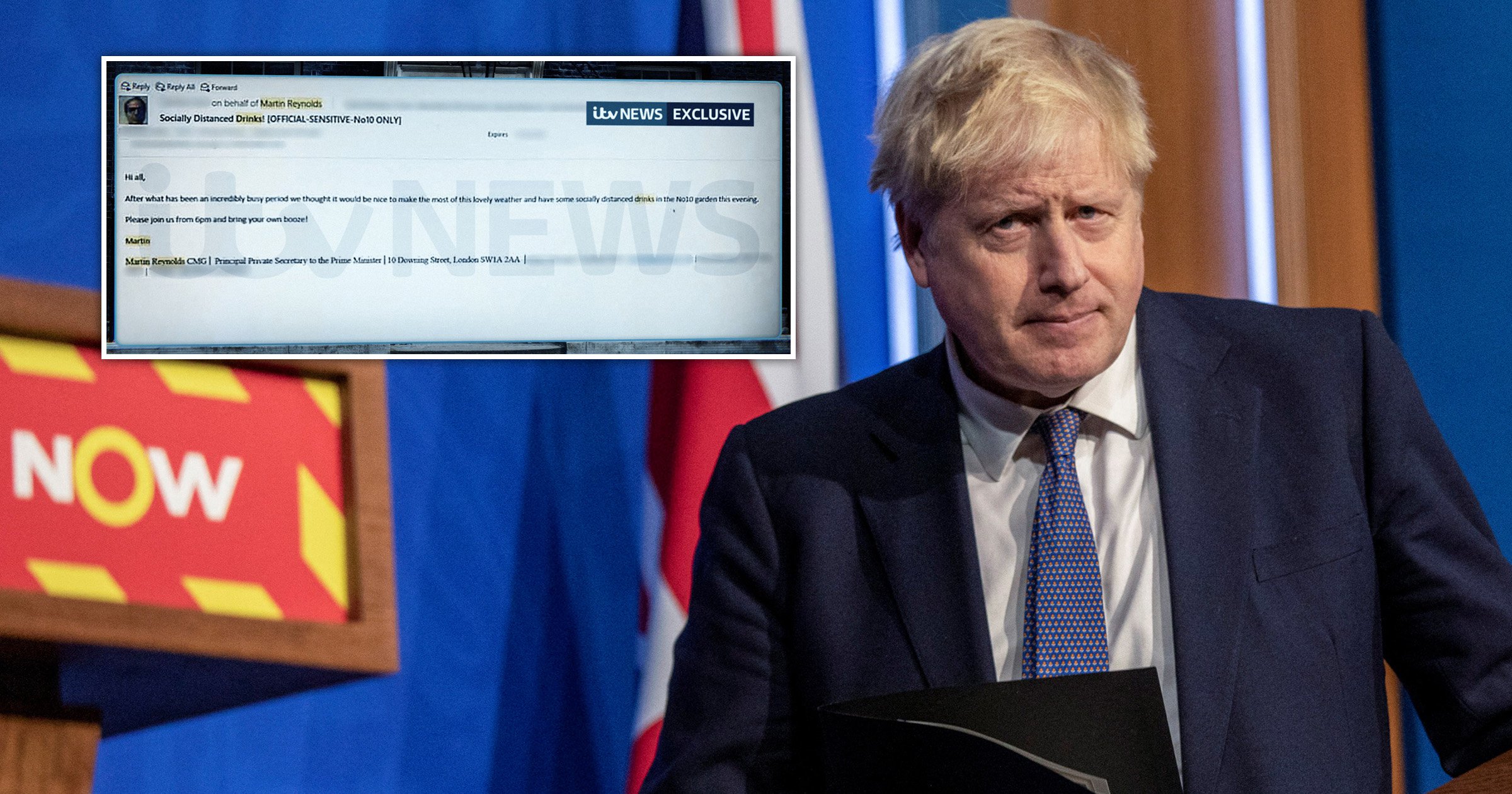 A leaked email allegedly shows more than 100 Downing Street staff were invited to a ‘bring your own booze’ party in the Number 10 garden during the first Covid lockdown.

The Prime Minister’s Principal Private Secretary Martin Reynolds is accused of sending the message which ‘encouraged staff to make the most of the lovely weather’.

Around 40 staff are said to have attended the gathering on May 20, 2020 to eat picnic food and have drinks – including Boris and Carrie Johnson.

The party is reported to have happened as millions across the UK were banned from meeting more than one other person outdoors.

ITV first reported the email that reads: ‘Hi all, After what has been an incredibly busy period it would be nice to make the most of the lovely weather and have some socially distanced drinks in the No10 garden this evening.

‘Please join us from 6pm and bring your own booze!’

Downing Street said they would not be commenting due to the Sue Gray inquiry into alleged government parties.

Asked on Monday if he and his wife attended the May 20 event, the prime minister replied: ‘All that, as you know, is the subject of a proper investigation by Sue Gray’.

The Tory leader has previously denied wrongdoing, saying he followed Covid restrictions at all times.

Senior civil servant Ms Gray took over the investigation from Cabinet Secretary Simon Case in December after allegations he had knowledge of at least one gathering.

The email follows a picture of Mr Johnson sitting alongside 18 people with wine and cheese in the No 10 garden on May 15, 2020.

Downing Street denied a social event happened, saying the Tory leader held ‘a series of meetings’ in his garden.

But the Government has been plagued with accusations of other parties apparently held while others were banned from visiting loved ones in hospital and their relatives’ funerals.

Labour accused Mr Johnson of having ‘no regard for the rules he puts in place for the rest of us’ on Monday.

Deputy Labour leader Angela Rayner said: ‘Boris Johnson has consistently shown that he has no regard for the rules he puts in place for the rest of us.

‘He is trying to get officials to take the fall for his own mistakes, but he sets the tone for the way Downing Street and the rest of Government operates.

‘At the time this party took place, key workers on the frontline were working round the clock to keep us all safe, people suffered loneliness and loss in unimaginably tough circumstances and for the majority of the country our freedom was limited to a daily walk.

‘Labour has welcomed Sue Gray’s inquiry, but we need confirmation that this latest revelation, and any other parties not yet revealed by press investigations, will be covered by her probe.’

Meanwhile, Liberal Democrat leader Sir Ed Davey claimed the event was a ‘kick in the teeth for everyone who has sacrificed so much during the pandemic’.

He said: ‘This is yet more evidence that while the vast majority of people were sticking to the rules, those in No 10 were breaking them.

‘It is a kick in the teeth for everyone who has sacrificed so much during the pandemic, from those who weren’t able to visit loved ones in hospital to nurses left wearing binbags as PPE.

‘To add insult to injury, on the very same day that the Culture Secretary said people could only meet in pairs outdoors, it seems Boris Johnson’s staff were holding a boozy party in Downing Street.

‘Millions of people are rightly furious and fed up of a Prime Minister who not only allowed his colleagues to flagrantly break the rules, but has repeatedly lied to the public about it.

‘Sue Gray’s inquiry must interview Boris Johnson personally and include this and any other parties held at No 10 during lockdown.’