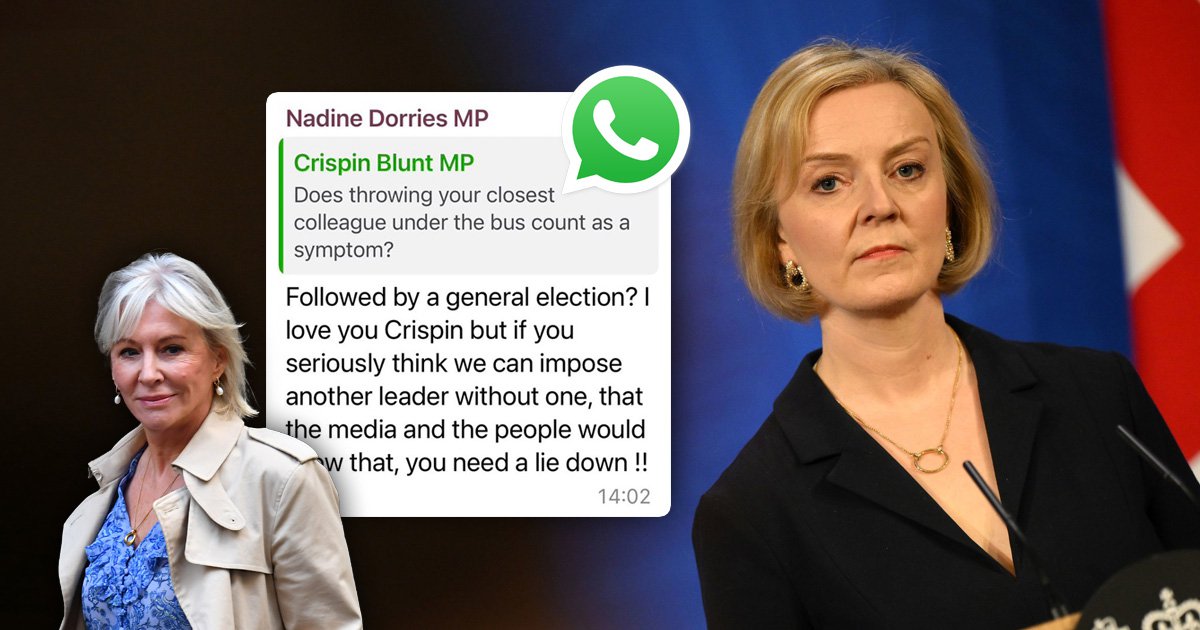 Leaked WhatsApp messages between Tory MPs are exposing the ever-yawning gap between Liz Truss and the Conservative Party.

The prime minister today clinched to power by firing Kwasi Kwarteng for implementing her own government’s financial policy.

In screenshots of a WhatsApp group shared by Sky News, Mr Blunt appeared to urge Rishi Sunak and Penny Mordaunt to take over as leaders in a joint ticket.

‘Does throwing your closest colleague under the bus count as a symptom?’ he told the ‘Conservative back bench’ WhatsApp group, according to the screenshots.

The Reigate MP appeared to say: ‘Enough. Emergency repair needed for our party and our country.

‘Step forward Rishi and Penny, with our support and encouragement in the interests of us all.’

Ms Dorries, however, bluntly shot down the idea, writing: ‘Followed by a general election?

‘I love you, Crispin, but if you seriously think we can impose another leader without one that the media and the people would allow that you need to lie down!

‘We may as well embrace dictatorship [because] it’s the most un-democratic proposal imaginable.’

There were further grunts and grumbles from backbenchers over Mr Krwarteng’s decision to bring the publication of his financial strategy and independent economic forecast to Halloween.

One MP said: ‘Cannot believe we are having a statement on Halloween. Why don’t we just print the headlines now?’

While a third MP said: ‘Nightmare on Downing Street. In short… cannot be Halloween.’

In a brief news conference from Downing Street, Ms Truss vowed to raise the country’s corporate tax rate — tearing up her campaign promise not to.

‘It is clear that parts of our mini budget went further and faster than markets were expecting,’ Ms Truss said, adding: ‘We need to act now to reassure the markets.’

Yet it appeared her stark retreat did little to soothe the fears of her MPs.

It follows comments made by Ms Dorries earlier today where she accused senior Tories of trying to ‘overturn democracy’ by plotting to remove Ms Truss.

‘They agitated to remove [Boris Johnson] and now they will continue plotting until they get their way.

‘It’s a plot not to remove a PM but to overturn democracy. #BackLiz.’