LONDON — England woke up on Thursday with a sensation it had not felt in more than a half-century: Its national soccer team made it to the final of a major international tournament, with the prospect of a first-ever European Championship victory within reach.

As England sealed a hard-fought 2-1 win against Denmark on Wednesday night at Wembley Stadium, fans crowded streets and celebrated in pubs, in fan zones set up across the country and at home. Politicians across the spectrum made a rare show of unity as they congratulated the players the nation has hailed as heroes, and England rallied together in a moment of public joy that many said was desperately needed.

“Every country has been through some painful 18 months,” said Matt Corby, 30, who was wearing a red England jersey and celebrated with friends at a London pub. “To live this historic moment in England’s football now, after 55 years, it’s beautiful. What a time to do it.”

Before its victory over Denmark, England had not reached a soccer tournament final since the 1966 World Cup, which it won. The team, sometimes known as the Three Lions, will now play on Sunday at Wembley in the final against Italy.

As fans on Wednesday wept, danced and celebrated in the streets of Newcastle, Portsmouth, Manchester and London — and elsewhere across the country — there was a feeling that it was finally England’s moment, one that previous generations had hoped for for decades.

“We would always get to this point,” said Derin Adebiyi, remembering England’s defeat against Germany in the semifinal of the 1996 European Championship.

Mr. Adebiyi, as he celebrated in North London, said England had passed its “litmus test.”

“This is transcending ideologies and dividing lines, and finally bringing the country together,” he added, praising the team for its performance, but also for taking a knee before every game, as an antiracism gesture. “These moments are so rare and important.” 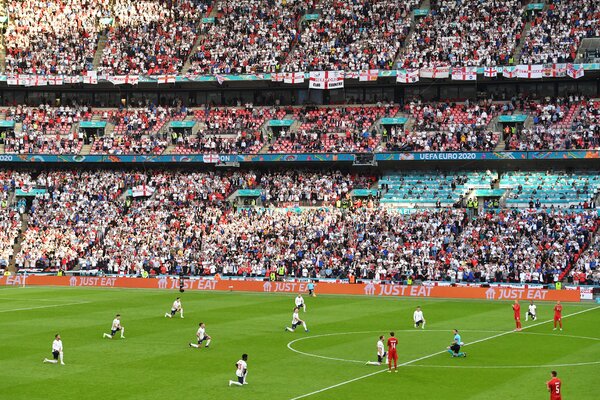 In a nation that is rived by deep political divisions, and that is still trying to figure out its post-Brexit future, observers lauded the values embodied by a triumphant and diverse squad, led by Gareth Southgate.

“The standard of leaders in this country in the last couple of years has been poor,” Gary Neville, a soccer legend and a fervent critic of Conservative politicians, said on Britain’s ITV News after England’s victory.

“Looking at that man there,” he added, referring to Mr. Southgate, “that’s everything a leader should be: respectful, humble, tells the truth, genuine.”

Mr. Southgate has praised his players for raising awareness about equality, inclusivity and racial injustice.

Many on the England squad have been outspoken social justice advocates. Raheem Sterling, who grew up near Wembley Stadium, has been vocal about racism and has championed inclusion causes. Marcus Rashford has campaigned for free meals for underprivileged schoolchildren during the pandemic. Harry Kane showed his support for the L.G.B.T.Q. community when he wore a rainbow armband during the tournament.

“We are heading for a much more tolerant and understanding society, and I know our lads will be a big part of that,” Mr. Southgate wrote in letter last month.

Although England will most likely face its toughest adversary in the tournament on Sunday, many fans rejoiced with a feeling that the Three Lions had already won, and that their team had rid itself of old demons.

Prime Minister Boris Johnson, not an avid soccer fan but perhaps sensing the political benefit of rallying behind a successful team, congratulated the players on Wednesday night for playing “their hearts out.”

“Now to the final,” Mr. Johnson wrote on Twitter. “Let’s bring it home.”

About 60,000 fans attended the game at Wembley, and as the final whistle blew, many more had gathered outside, often disregarding social distancing measures and mask wearing despite a rising number of new coronavirus cases in the country in recent weeks. Fans climbed on buses and lampposts and chanted, “It’s coming home,” and drivers honked their horns until late into the night.

London’s Metropolitan Police tweeted that “following the fantastic win by England,” at least 20 people had been arrested during the celebrations.

While optimism dominated the news on Thursday, the victory’s aftermath comes as researchers warned in a report that England was facing a rapid growth in coronavirus cases, and that men were 30 percent more likely to be infected.

“It could be that watching football is resulting in men having more social activity than usual,” Steven Riley, a professor of infectious disease at Imperial College London and one of the report’s authors, told the BBC.

The World Health Organization warned last week that the European Championship Games, held in cities across Europe, had driven a rise in cases. At least 60,000 people are expected to attend the final on Sunday in London.

Britain’s remaining pandemic restrictions are set to be lifted by July 19, even as public health experts expect 50,000 daily infections later in the month.

Still, many forgot to set their worries about the pandemic aside on Wednesday and focused instead on victory, which came after a nail-biter. England’s pregame confidence was quickly tamed by Denmark’s first goal, followed by the frustration at unsuccessful attacks. But when the team’s captain, Mr. Kane, scored a winning penalty after 30 minutes of extra time, victory was theirs.

Italy now awaits. The team has been unbeaten in 33 games, and will compete in its fourth European Championship final. In Italy, too, a victory would bring some welcomed sense of unity and optimism after years of political uncertainty — and after 18 months of hardship brought by the pandemic.

But English fans won’t care. Wednesday’s semifinal had been at times a sketchy and stressful game, and Sunday’s final may well be, too.

England had also disappointed many times, said Sarah Barron, 26, as she celebrated in a London beer garden.

But this time, she argued, it’s different.

France’s raw recruits sign up for return of national service

Neither Tories nor Labour have 'credible' spending plans, experts say