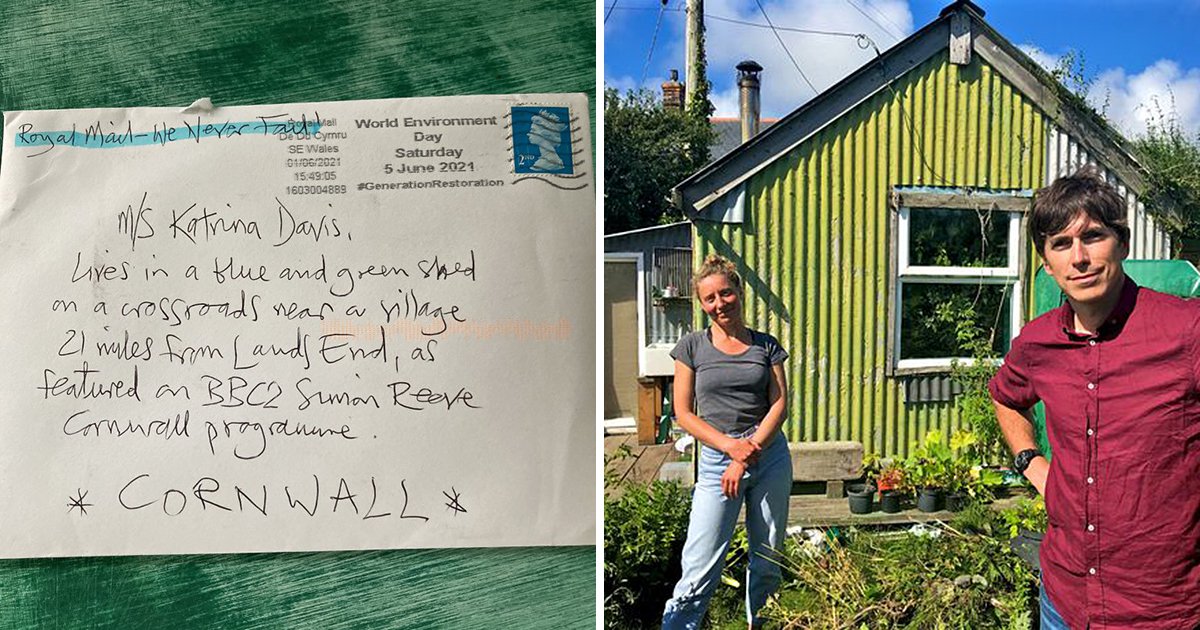 Royal Mail has won widespread praise after delivering a letter addressed to a woman who ‘lives in a blue and green shed’.

The unconventional correspondence added that Catrina Davies, whose name was spelt wrong, could be found ‘on a crossroads near a village 21 miles from Lands End, as featured on BBC2 Simon Reeve Cornwall Programme.’

The sender helpfully added an asterix with the word ‘Cornwall’ in capital letters to the envelope.

Ms Davies hailed the delivery as a ‘sterling effort’.

A town, street name or postcode were omitted, but a highlighted note – presumably written by a postie – chirpily added ‘Royal Mail, we never fail!’ to the front of the letter.

The unidentified sender had informed postal workers that the outbuilding was featured on Mr Reeve’s documentary series, which featured Ms Davies’ story of living in the shed for more than a decade.

During the programme, Ms Davies talked about affordable housing in Cornwall and she said the letter had been in support of her comments.

She added that the note was a ‘lovely thing’ to receive in the post but did not say who had sent it or exactly what it said.

‘It just makes you feel like maybe the world’s smaller and more local than it feels sometimes,’ Ms Davies explained.

‘I guess it would get sent to Cornwall and then somebody would think “Land’s End, I’ll send it to Penzance” and then there must have been somebody in the Penzance sorting office who went “yeah, I know where that is”.

‘It’s just great that they made the effort and didn’t just throw it away.’

While the sender saw her TV appearance in November, Ms Davies said she has yet to watch it herself.

Royal Mail explained that they got the letter to its intended destination using ‘local knowledge’ and ‘detective skills.’

A spokesperson said: ‘We are absolutely delighted that our postmen and postwomen were able to use their detective skills in getting this item of mail delivered safely to the right person.

‘Local knowledge plays a large part in identifying the correct recipients in such cases.

‘Our people always go the extra mile in seeking to deliver our customers’ mail securely.

‘However, we would ask our customers to help us by always addressing their mail clearly and accurately, and by always using the full address, including the postcode.’

Simon Reeve tweeted Ms Davies saying: ‘Hope whatever was inside brought you a smile’.

Boris Johnson vaccine passport hints: Will you need proof of vaccine to go to the pub?