The Brexit-supporting minister claimed if MPs do not support Prime Minister Theresa May’s controversial deal then it could risk no Brexit at all, which would trigger a “democratic as well as a constitutional crisis”. Dr Fox told BBC Radio 4’s Today Programme: “I think that we need to get our colleagues in the House of Commons to focus on what the real alternatives are. A lot of my colleagues say that they would rather leave with no deal that not leave at all. I would put myself in that grouping.

“I would rather not leave without a deal because I think it would be very turbulent for our economy.

He added: “The worst is not to deliver on Brexit. For a lot of my colleagues, I think they still believe that there is a route to no deal.

“I came to the conclusion some time ago that that was unlikely given the House of Commons that we have.

“I think we will see today that there is a mood in the House of Commons to do to stop us leaving without a deal even if that means no Brexit. 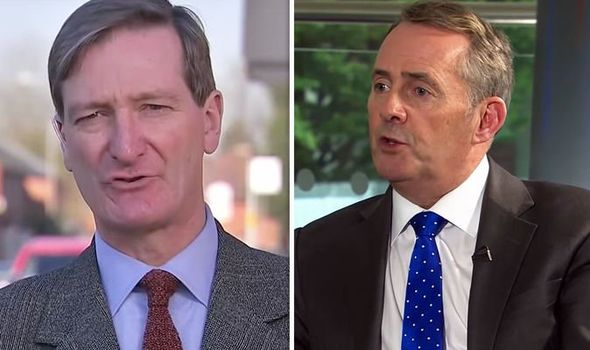 Last week MPs voted for a Brexit extension and on Thursday evening the EU27 agreed to extend Britain’s departure from the European Union until May 22, if MPs back Mrs May’s withdrawal agreement.

If the Prime Minister’s Brexit deal is rejected by MPs, then the UK will have a shorter delay, until April 12, when Britain must then set out whether it wants to leave without a deal or agree to a longer extension.

Following the outcome of the EU summit, Downing Street has said Mrs May is “absolutely determined” to end the uncertainty over Brexit. Her official spokesman said: “There is now a clear point of decision.

“If we are able to have a successful vote next week then we can pass the necessary legislation for ratifying the agreement and we can, as a country, be outside the European Union two months today.”

But the Prime Minister has now faces one of the toughest weeks of her Premiership, with MPs poised to seize control of the Brexit process and facing pressure to resign.

Mrs May summoned Brexiteers to Chequers on Sunday in the hope of persuading them to finally back her controversial divorce deal.

She faced repeated calls to name a date for her departure but refused to do so, instead warning that failing to back her deal will lead to a softer Brexit.

A Downing Street source indicated the Prime Minister is only prepared to set out a timetable for her departure once she is “confident” that she had the numbers to support her deal.