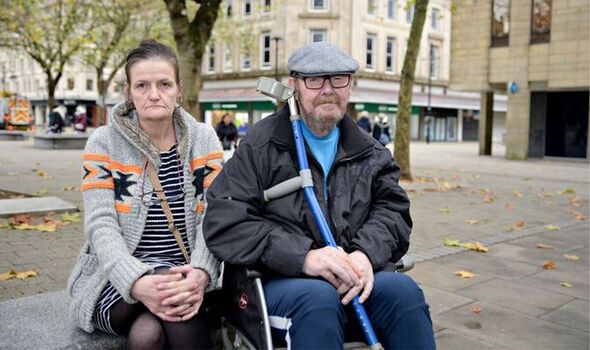 The Prime Minister is yet to commit to raising benefits in line with inflation, potentially leaving thousands of families facing an even more difficult winter.

While benefits are usually raised in line with consumer price inflation each April, the rocketing rate of inflation has thrown this into doubt.

Chancellor Jeremy Hunt was due to set out the government’s tax and spending plans in a Halloween Budget on Monday (October 31). However, just days before the announcement, he revealed there will be an Autumn Statement on November 17 instead.

While millions of pensioners and benefits claimants face an anxious wait to see whether payments are going to change, the Manchester Evening News’ Paige Oldfield visited Bolton, where pensioners and people in receipt of Universal Credit shared their experiences. Here is what she discovered:

Trying to use candles for warmth and eating just one meal a day. It’s a bleak reality in Greater Manchester in 2022.

Living off Universal Credit, it’s all Sarah says she can afford. The £260 payment lands in her bank account every fortnight. Supporting a child, it’s gone within days, forcing her to rely on friends and yellow-stickered supermarket items to survive, she says.

“It’s massively impacting my mental health,” the 49-year-old continued. “You just want to go to sleep so you don’t have to think about it and you’re not cold. We have one meal a day, it might be a chippy. We have to wait until 7pm for Tesco to put out the reduced items. It’s like robbing Peter to pay Paul. People are going to get desperate.”

Sarah, from Bolton, is among the millions of Brits struggling to keep up with her energy bills. As temperatures fall, she says she can’t turn her heating on due to accumulating debt on her prepaid meter.

“It’s just terrible, I haven’t had my gas and electric on because I’ve accumulated £71 in debt. I’ve been charged for not using the meter. I’ve got one 16-year-old, but how are families with small children going to cope?

“It’s alright telling people to put more layers on, but everything stinks of damp. I’ve been staying with my friend who lives in assisted living because he has all his heating provided.

“I’m having to rely on friends and it’s a case of you help them so they help you. I’m running my friend’s errands so I can stay at his. I put candles on instead of a heater. Surely they can’t just let it go up and up. Why are they being so selfish?”

Mavis and Thomas Lavin walk arm in arm past Bolton Town Hall. The pensioners have been married for almost fifty years and are now in ill health. Falling temperatures and rising energy costs are taking their toll.

“It’s colder now and we’re freezing,” Mavis, 91, said. “We don’t have the heating on in the morning anymore, we put it on for an hour in the evening.

“We’ve both got bad health; I have arthritis and it’s making it worse in both of my legs and my wrists – it never stops.

“They’re all for the rich – and they won’t tax the oil companies. We’re getting old, it’s the other people we feel sorry for. I wouldn’t like to be here in the future.”

Thomas served in the Royal Air Force before spending the rest of his life working as a slater. “We’re having to buy cheaper food; we used to be able to go to Tesco and spend £60,” he said. “It’s like life is not worth living. I’ve worked all my life and I’m getting nowt.”

While some are uncertain about the future, others feel optimistic. William Whyatt, from Westhoughton, is positive new prime minister Rishi Sunak will “sort it out”.

“He comes from a family who are well-versed in money. I think he will sort it out,” the 92-year-old said.

“I was 92 on October 1, I’ve been about a long while so I know about prime ministers.

“It’s going to get better. Not immediately, but we’re just going to have to wait and see. I believe Rishi is an experienced person with money and that’s what we need.”

Tony Smith, from Radcliffe, is a pensioner who has cut back. The 70-year-old told the M.E.N: “I don’t buy a lot of stuff like I used to. You’ve just got to get by – I don’t look forward, I just go from one day to the next. That’s all.”

Angela Rushton, a former healthcare assistant in the NHS, is new to being a pensioner. The 66-year-old from Crompton Fold retired earlier this year, with an NHS pension.

While she’s coping with rising costs for now, she fears the cash won’t stretch far into the future – but she’s most fearful for others who have only the state pension to rely on.

“I feel sorry for people who are worse off than me who will be struggling, like people who are on the state pension,” she said. “They will struggle. I’m dreading (prices going up) because my pension isn’t going to last me forever. I’m lucky – it’s the people around me that are going to struggle.”

Inside the shared house where Liverpool suicide bomber lived