Home » Europe » Life still will not be normal after May 11, Macron tells French

Lifting of lockdown restrictions is only first step, French president has warned. 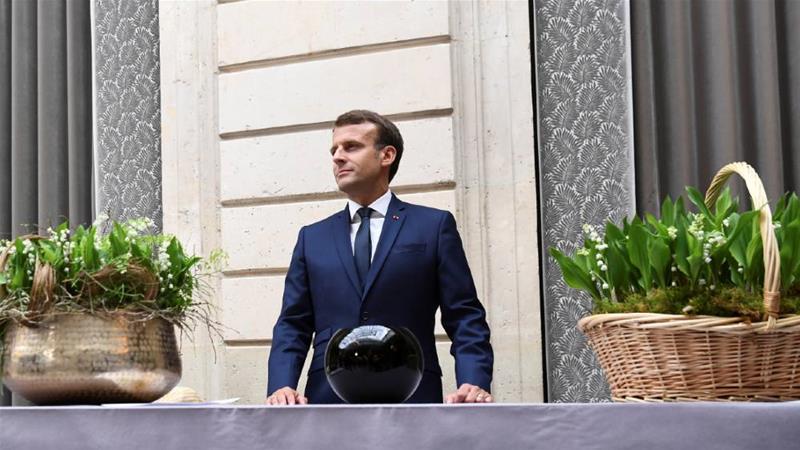 Normality in France will not be resumed as soon as the nation’s lockdown is lifted, President Emmanuel Macron has warned.

The easing of restrictions will only be a first step as the world looks to emerge from the crisis created by the coronavirus outbreak, he said on Friday.

“May 11 will not be the passage to normal life. There will be a recovery that will need to be reorganised,” Macron said in a speech at the presidential palace in Paris. “There will be several phases, and May 11 will be one of them.”

But not all aspects of prepandemic life are wanted. With a near-total lockdown, French cities have seen drastically reduced air pollution, and officials are hoping to prevent a return to days of dirty air.

A 20 million-euro ($21.7m) scheme launched by the government will offer 50 euros ($55) to citizens to pay for bike repairs, in a bid to encourage people to ditch four wheels in favour of two when the lockdown is lifted.

May 1 usually sees thousands of demonstrators on the streets, but traditional Labour Day protests were cancelled this year due to the virus that has killed about 24,000 people across France.

Unions instead organised online activities and asked people to bang pans and put out banners on their balconies to mark the day. Police disbanded a small protest in central Paris.

It was in stark contrast to this time last year, when tens of thousands of labour union and “yellow vest” protesters were on the streets across France demonstrating against Macron’s policies.

Macron, in a message on his Twitter account, lauded the traditional parades and French workers, urging unity and solidarity during these tough times.

But highlighting the rocky path ahead, union officials were quick to underscore their concerns amid the crisis.

“Even if today we are confined, our demands are not,” Yves Veyrier, head of the Force Ouvriere union, told France Inter radio. 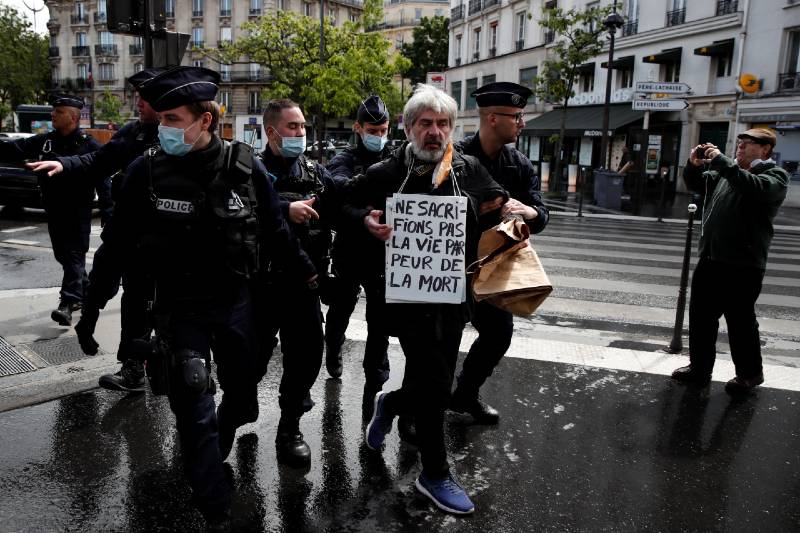 Far-right opposition leader Marine Le Pen pressed ahead with her party’s annual May 1 tradition of honouring medieval heroine Joan of Arc by laying a wreath at the golden statue of the 15th-century warrior in central Paris, despite the lockdown.

“I’ve never said I had doubts about the confinement. I just said complete confinement was the solution when we failed to prevent the epidemic,” Le Pen, wearing a mask, told reporters.

“A successful end to the lockdown is with tests for everybody, masks for everybody – and I am opposed to schools opening before September.”

Unwinding could be rewound

From May 11, schools will gradually reopen and businesses will be free to resume operations as the country’s 67 million population comes out from the confinement in which they have been since mid-March.

The government has said it is prepared to slow or delay the unwinding of the lockdown if the virus infection rate spikes markedly higher, with administrative departments divided into “red” and “green” zones.

Opposition legislators and some experts have questioned the practicalities of schools reopening, the broad use of public transport and the tough measures that will continue to affect areas less affected by the virus.

Question marks have also been raised about the government’s ability to reach its target of 700,000 COVID-19 tests by May 11, their implementation and the possible isolation of people who tested positive for the illness.