The 48-year-old, who has not been identified, was sheltering from a thunderstorm on the beach with her daughter. Now she is in critical condition in a hospital intensive care unit after a lightning bolt struck her necklace.

“It is still too early to talk about the consequences and outcomes.”

Dr Frankic added the woman had suffered serious internal injuries. The mother and her daughter had been sunbathing at a popular beach near the Split holiday resort on Saturday afternoon, when a huge thunderstorm swept in from the sea.

The pair ran for shelter, but the woman was hit by a lightning bolt as they ran, the 300 million volt blast knocking her unconscious. Her daughter screamed for help, and a medic who was on hand dealing with a nearby bike accident raced over to provide first aid.

The heroic medic successfully revived the woman, and she was rushed to the resort’s KBC hospital, where she remains in critical condition in the intensive care unit. She has had a serious head injury and burns. 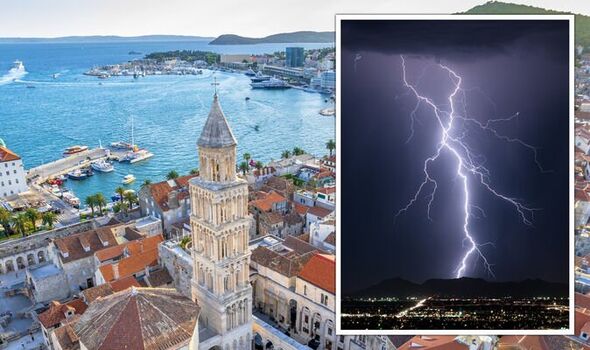 Waiters in a nearby bar called Joe’s also ran over to help. One told the MailOnline: “One minute everyone was sunbathing happily on the beach, the next the sky turned as black as night and a massive thunderstorm was overhead. The lightning was something I have never seen before – really bright flashes and you could hear them fizzing.

“Everyone was rushing off the beach and then at one point there was a massive bang and a lightning flash at the same time and I looked out and saw the woman on the floor and her daughter with her. Several people rushed to help her and then a doctor arrived to give first aid. He was helping out at the triathlon that was going on at the time.”

An official who was nearby on the triathlon added: “The woman was struck close to the beach and fortunately for her one of our on-call medics who was attending the event managed to revive her. 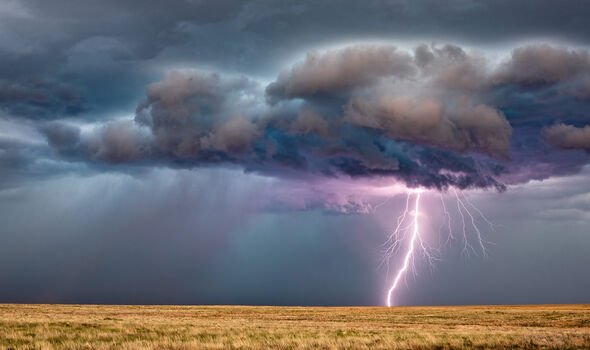 “He was close by dealing with a bike accident that had just taken place and when he heard the screams he rushed over to help the woman and he stabilised her until the ambulance arrived.”

Local police posted on their Facebook page: “At 3:15 p.m. (on Saturday) a report was received from the hospital that an emergency medical aid had been requested to arrive at the Kašjuni beach in Split, where one person was allegedly injured by a lightning strike. The woman received medical assistance at the scene and was transported to the hospital where she was kept for further treatment, her life is in danger.

“An investigation will be conducted at the scene and all the circumstances of this accident are being determined.”

Official advice on how to avoid injury during thunderstorms at the beach is to get out of the water and head to the nearest building. Do not seek shelter under a tree or a tent.

An FCDO Spokesperson confirmed: “We are providing support to the family of a British national in Croatia and are in contact with the local authorities.”

British student describes miracle escape after being trampled by rhino