In footage released on social media, hundreds of passengers, some with large suitcases and dogs, were made to walk through the alternate tunnel alongside the 31-mile rail route between Britain and France. Brits returning from their holidays in France on the 3.50pm Eurotunnel Le Shuttle service from Calais to Folkestone on Tuesday were forced to wait in the sub-sea tunnel for nearly five hours, citing issues with the replacement transport, before they were transported to another train. 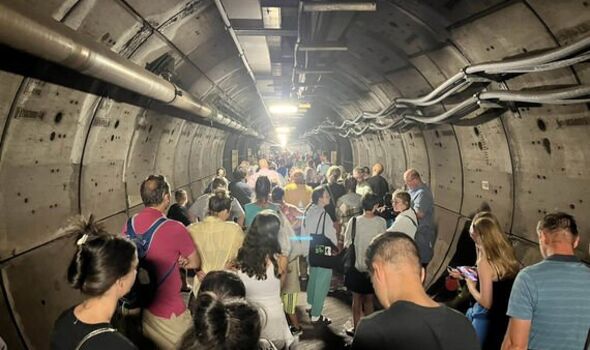 Michael Harrison, from Cranbrook, Kent, one of those on the evacuated train, said: “We got on the 3.50pm crossing, approximately 10 minutes in the lights went out and the train stopped.

“They reset things and set off for another five minutes. It happened again at which time we waited a further couple of hours to decide they couldn’t see a problem but had to evacuate the train to another train.

“After further waiting we left the train through the emergency link tunnel to the service tunnel. We then walked approximately 10 minutes to a train in front of the stricken train.

“This was a bus carriage where we got transported to Folkestone. That train then stopped as it couldn’t get traction, presumably as it was long and had no weight on it. There were gasps of incredulity when that was announced. We finally arrived in Folkestone six hours after boarding.”