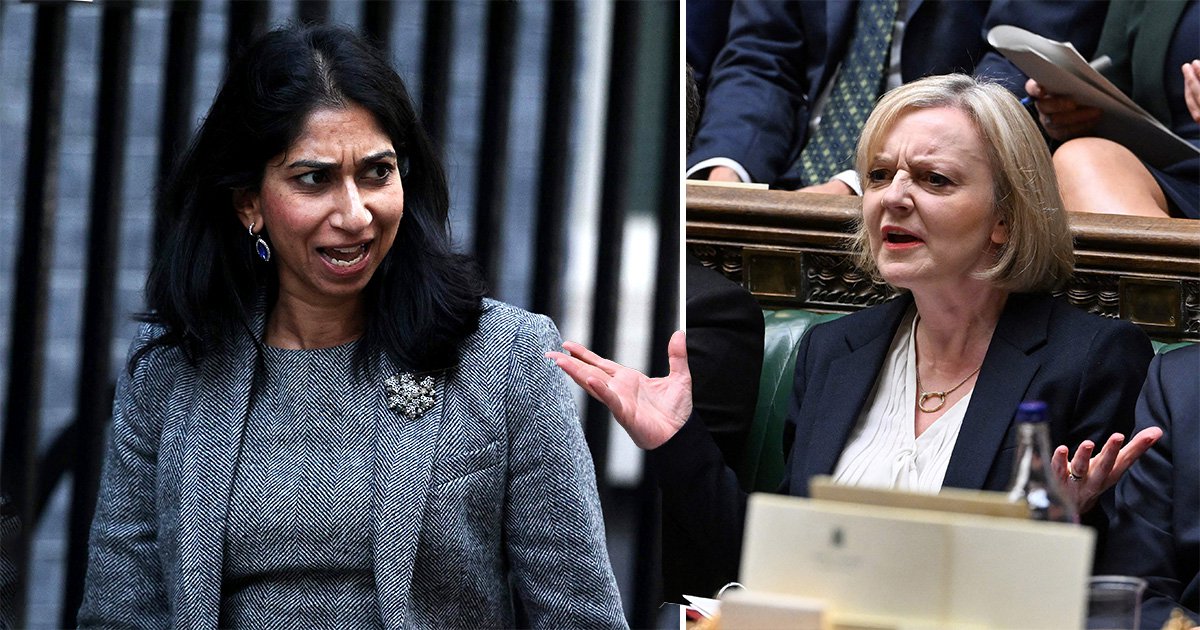 Liz Truss and Suella Braverman had a ‘fiery’ bust up before the Home Secretary left her job yesterday, it has been claimed.

On a day of utter chaos in Parliament, Ms Braverman used a brutal resignation letter to unexpectedly quit following a security gaffe that saw her send classified documents from a personal email.

Many Tories now fear the Government is in a death spiral and believe it is just a matter of time before the prime minister is forced from office – amid suggestions she could be gone within ‘hours not days’.

Now it has been reported that Ms Braverman’s departure – which may have been forced upon her by Ms Truss came after a ’90-minute shouting match’ on Tuesday night.

Multiple sources told the Daily Mail that the ex Home Secretary, who was defeated in the Tory leadership race this summer, warned the PM that it would be ‘insane’ to relax immigration rules in order to boost economic growth.

One said: ‘(Ms Braverman has) obviously gone because of a bust-up.

‘She was always a flight risk, like Penny Mordaunt – she’s positioning herself for what’s to come.’

Now there are concerns in Downing Street about what one of the shortest-serving home secretaries in British history could say in her resignation speech later today.

In her letter, Ms Braverman – who quit just days after former chancellor Kwasi Kwarteng was sacked – wrote that she had ‘concerns about the direction of the government’ and told Ms Truss to ‘stop pretending we haven’t made mistakes’.

In an obvious swipe at her former boss, she added: ‘I have made a mistake; I accept responsibility; I resign’.

Another source described the pair’s previous meeting as a ‘shouting match’, saying raised voices could be heard outside, with Ms Braverman said to be furious.

She is said to have told the PM that the idea of scrapping a plan to relax migration rules was ‘insane’, adding: ‘Are we just going to junk every manifesto commitment going?’

Ms Truss has now replaced Ms Braverman with former transport secretary Grant Shapps – one of her fiercest critics on the backbenches.

The exodus had appeared to continue with speculation that Chief Whip Wendy Morton and her deputy Craig Whittaker had walked out after another parliamentary shambles last night.

But the two appear to still be in office despite a Government U-turn on a threat to strip the whip from Conservative MPs if they backed a Labour challenge over fracking.

In extraordinary scenes at Westminster, Cabinet ministers Therese Coffey and Jacob Rees-Mogg were among a group of senior Tories accused of pressuring colleagues to go into the ‘no’ lobby, with Labour former minister Chris Bryant saying some MPs had been ‘physically manhandled into another lobby and being bullied’.

In a sign of the growing pressure on Ms Truss, Tory former Brexit minister Lord David Frost joined the calls for her to step down.

Paul Goodman, the editor of the influential ConservativeHome website, said he had never ‘never seen anything like the chaos’ of yesterday.

Other Conservatives piled in, with a visibly furious Sir Charles Walker telling BBC News: ‘As a Tory MP of 17 years … I think it’s a shambles and a disgrace. I think it is utterly appalling. I’m livid.’