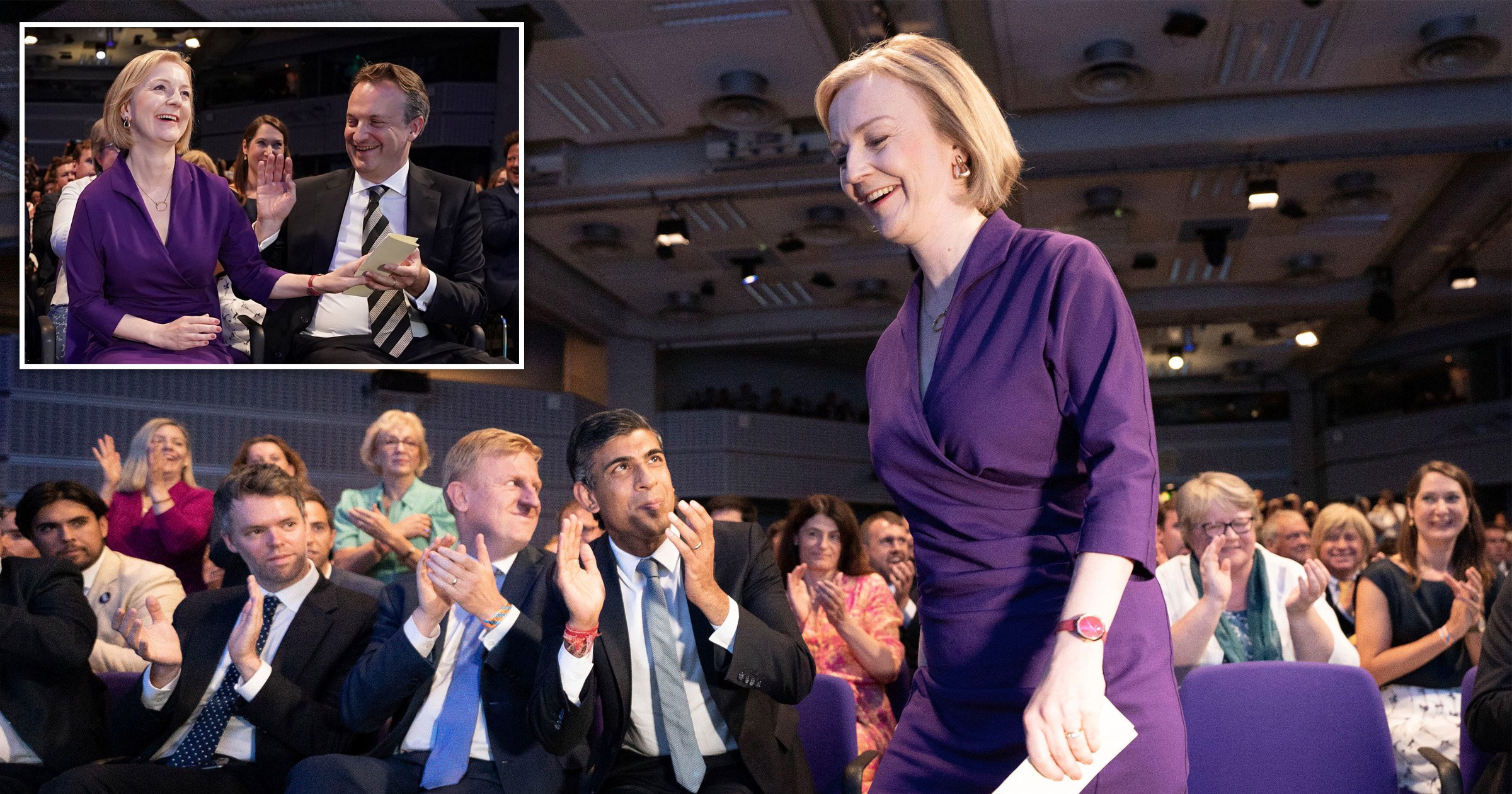 Liz Truss ‘should have been the bigger person’ and acknowledged Rishi Sunak as she became leader of the Conservative Party, a business psychologist has said.

The new leader did not look at or acknowledge her leadership rival after the result was announced this afternoon.

Instead, she looked straight forward as she walked to the stage where she warmly embraced Sir Graham Brady as the audience stood to applause.

Ms Truss had sat a seat away from her opponent at the Queen Elizabeth II Centre in Westminster as the prolonged and ‘hard fought’ leadership contest reached its conclusion.

Beverley Stone, a chartered business psychologist whose field includes non-verbal communication, said: ‘When Liz Truss stood up to go on stage, she didn’t bother to even look at Rishi Sunak, let alone shake his hand.

‘However vicious the competition between them during their leadership campaigns, she should have been the bigger person and acknowledged him. If this is an example of the kind of grudges she holds, I don’t think it’ll be good for her image.

‘It would be helpful if someone coaches her on the importance of being empathic and showing more sportsmanship.’

The race had been fractious at times, with the pair engaging in sniping and coming to verbal blows over pressing issues such as the cost of living crisis.

On Sunday, Ms Truss told the BBC that she was ‘not a quitter’, something that her rival could be accused of after he stepped down as Chancellor and set the dominoes rolling on Boris Johnson’s time in No10.

The pair also clashed over how to deal with the cost of living crisis, with Ms Truss accusing her fellow candidate of ‘Gordon Brown economics’.

For his part, Mr Sunak described his adversary’s economic approach, including tax cuts, as a ‘gamble’ on the nation’s finances and accused her of ‘starry-eyed boosterism’.

After taking the podium, the new premier, 47, did not immediately mention her rival, instead lapping up the applause and thanking Sir Graham, the committee and the wider party ‘for organising one of the longest job interviews in history’.

She then praised her ‘family, friends and political colleagues and all of those who helped on this campaign’.

Only then did she ‘pay tribute’ to her ‘fellow candidates, particularly Mr Sunak’ for a ‘hard-fought campaign’ that she said showed the depth of talent in the party.

Mr Sunak looked up and clapped politely during the opening minutes of his rival’s acceptance speech.

Ms Truss, 47, also delivered a memorable soundbite as she paid tribute to ‘my friend’ Boris Johnson, saying the outgoing prime minister is ‘admired from Kyiv to Carlisle’.

Emma Serlin, a communication expert at the London Speech Workshop, said: ‘I don’t think Ms Truss’s first act as leader necessarily had to be shaking her opponent’s hand. For me, that’s not a big deal.

‘What stands out is the control shown by an ambitious woman who knew exactly what she wanted.

‘She was breathing very fast before the votes were announced but she waited for the 81,000 announcement before breaking into a proper smile.

‘It was a real moment of glee and when she got up she absorbed the applause but she also knew when to pause it, which was her first strong non-verbal move after becoming the new Conservative Party leader.

‘There’s a particular pressure on women not to show excessive emotion. Otherwise she was in control-mode as she did what she needed to do.’

On Twitter, Mr Sunak said: ‘Thank you to everyone who voted for me in this campaign. I’ve said throughout that the Conservatives are one family.

‘It’s right we now unite behind the new PM, Liz Truss, as she steers the country through difficult times. ‘

Ms Truss, who is currently the foreign secretary, will travel to Balmoral tomorrow where she will meet the Queen and be asked to form a government and become prime minister.

Thank you to everyone who voted for me in this campaign.

Iâve said throughout that the Conservatives are one family.

Itâs right we now unite behind the new PM, Liz Truss, as she steers the country through difficult times.

Mr Johnson will formally resign and have his own audience with Her Majesty, 96, at the castle in Royal Deeside ahead of the engagement.

The new prime minister will then meet Mr Johnson for a handover of power and address the country later in the evening to thank Tory party members for voting for her and set out her hopes for her term in power.

Ms Truss will become the 15th prime minister during the Queen’s 70-year reign and the first appointed in Scotland instead of London.

EE fined £100,000 for sending millions of texts to its customers without consent