Liz Truss has addressed the nation for the first time since becoming prime minister against a gloomy backdrop.

She returned to a sodden Downing Street from Scotland, where she was officially invited to form a new government by the Queen earlier today.

The bleak weather which greeted Ms Truss’ return served as a grim portent for the challenges which face her in the months ahead.

Clouds are gathering over Britain as the cost of living crisis forces families into poverty – and the forecast for the winter ahead is even worse.

Heavy showers over London played havoc with plans for the speech, with the famous Number 10 lectern even having to be hastily covered with a shabby bin bag at one stage.

Tory MPs awaited her arrival huddled under umbrellas as she was hurried through west London in a convoy from RAF Northolt.

During a break in the rain, she told the country: ‘We shouldn’t be daunted by the challenges we may face.

‘As strong as the storm may be, I know the British people are stronger…I am confident that together we can ride out the storm.’

Throughout the speech, she referenced the challenges her government will need to tackle the months ahead.

She added: ‘Our people have shown grit, courage and determination time and time again.

‘We now face severe global headwinds caused by Russia’s appalling war in Ukraine and the aftermath of Covid-19.

‘Now is the time to tackle the issues that are holding Britain back.’

A flurry of senior cabinet appointments are expected to be confirmed in the hours ahead as she seeks to form a government to tackle a daunting set of crises facing the country. 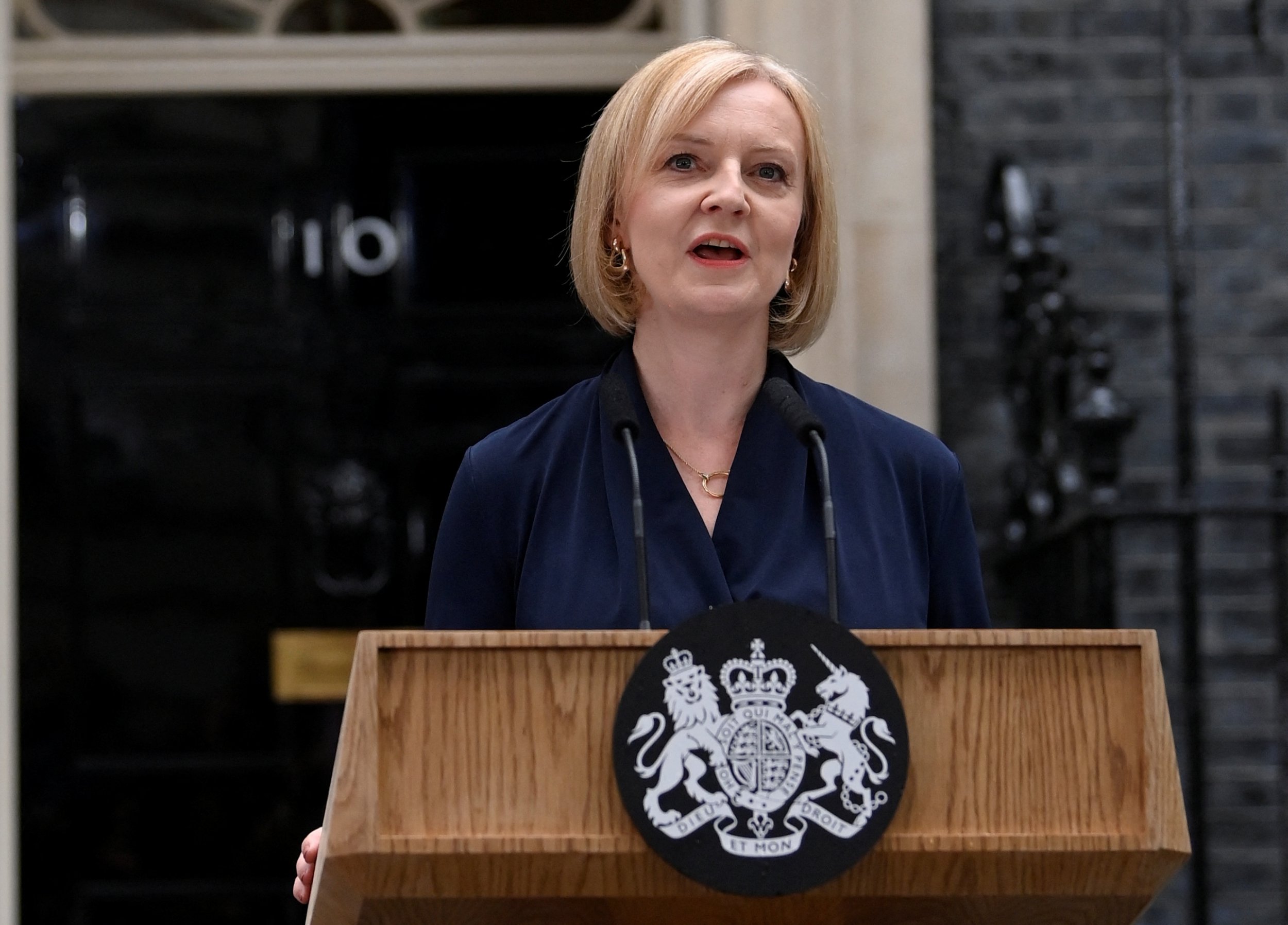 She is looking at options to freeze the price cap ahead of expected further rises in the new year, with the reported price tag expected to end up somewhere between £90 and £130 billion.

The new PM, who first became an MP in 2010, has been in government for almost a decade but only truly came to the fore in recent months as foreign secretary.

Ms Truss won support in the Conservative Party for her tough stance on Russia’s invasion of Ukraine and has promised low tax, free market economic policies, a shift she has contrasted to the approach taken by Rishi Sunak.

She was handed an elevated position in the cabinet by Mr Johnson, the man she backed early to become leader of the Tory party during the 2019 leadership election.

The South West Norfolk MP becomes the 56th prime minister in British history, the 15th to serve during the reign of Elizabeth II, the fourth Tory to hold the position since 2010 and the third female PM in history.

During the leadership election, some party members rewarded her for loyalty to the outgoing PM during the final days of government.

She did not join the dozens of ministers who resigned in protest over the Chris Pincher affair, which brought down his teetering administration in July.

Boris Johnson bid farewell to Number 10 this morning before flying to Balmoral for a final audience with the monarch.

He left the stage after a tumultuous three years and 44 days in office but all eyes remain on his movements in the wings as he considers his next move.

Some have speculated he will attempt a comeback and, despite the threat of a Commons suspension and the prospect of Labour unseating him in a future election, allies have previously disclosed he intends to remain as an MP.

For the time being, Mr Johnson has urged the party to get behind Ms Truss and indicated he intends to stay out of the fray.

He used his Downing Street speech this morning to compare himself to Cincinnatus, a Roman statesman who, according to legend, returned to his farm after triumphing in battle.

He said he is like ‘one of those booster rockets that has fulfilled its function’, and will now be ‘gently re-entering the atmosphere and splashing down invisibly in some remote and obscure corner of the Pacific’.

Mr Johnson added: ‘Like Cincinnatus, I am returning to my plough and I will be offering this government nothing but the most fervent support.’

But he couldn’t resist the temptation to have one final dig at the MPs he led to a crushing general election victory in 2019 before they turned on him this summer.

Mr Johnson said: ‘The baton will be handed over in what has unexpectedly turned out to be a relay race.

‘They changed the rules halfway through, but never mind that now.’

All the COVID virus in the world could fit in a can of coke, says mathematician