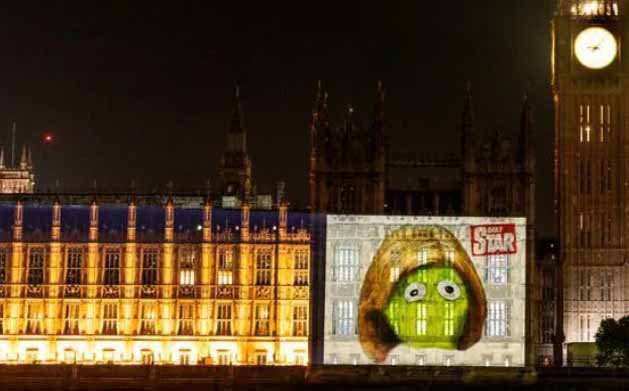 Against all the odds and expectations, a 60p lettuce is celebrating victory after outlasting arch nemesis Liz Truss.

In celebration of its triumph, an image of the victorious vegetable was beamed onto the House of Commons on Thursday evening.

The lettuce can be seen gazing out across the River Thames, taking a moment to revel in its political glory.

With political success comes celebration too, and the lettuce was pictured afterwards with close friends including a banana, lemon and apple sharing a bottle of Prosecco.

The Liz vs Lettuce contest was started by the Daily Star, who began a live stream asking which would survive longer.

Their front page asked ‘How long can wet lettuce Liz romaine?’ and it became a global joke, with even a Russian government official tweeting ‘Congrats to lettuce’ after she resigned.

Truss’ premiership ended in chaos, with frenzied plotting from her own MPs with reports of jostling, manhandling, bullying and shouting outside the parliamentary lobbies.

But the lettuce stayed strong, it held on through and did not bow down to political pressure like the shortest serving PM in British history.

In the end, 16 MPs publicly called on Ms Truss to go as the lettuce sat on the table, waiting for its moment when it could claim political victory.

It was Sir Graham Brady’s job to inform the PM she needed to step down and it was at this moment she realised not only was her premiership over but that she had lost to her political nemesis, the lettuce.

Speaking outside Number 10, in a surprisingly upbeat tone, the PM addressed a nation in anticipation.

She said: ‘I came into office at a time of great economic and international instability. Families and businesses were worried about how to pay their bills.

‘I have spoken to the King to notify him I am resigning.

The Daily Star’s lettuce is yet to confirm whether it will be putting its name in the hat to become the next PM.

But from one political victory, comes another challenge. Lettuce faces the prospect of being up against ex-PM Boris Johnson and familiar face Rishi Sunak if it does decide to run.

Lettuce is currently 1000/1 to be one of your five (Prime Ministers) a day.

Any candidate wishing to be chosen will need the backing of 100 MPs, with nominations closing at 2pm on Monday.

The party’s membership will then spend the next four days voting for the next Prime Minister via an online voting system.

Whoever wins will then pick up the poisoned chalice.

In all honesty, it would be a miracle if lettuce won, considering it has now been gobbled up by Jeremy Vine.