Last year 135 people were killed in the capital in the bloodiest year in almost a decade, and Mr Bailey told Express.co.uk that nothing would change as long as Sadiq Khan absolved himself of responsibility. Mr Bailey said: “It has certainly been a long time coming. We’ve had a lot of ivory tower politicians saying the right things but not really providing people with hope.

“I think it’s that lack of hope, that lack of economic development in the poorest parts of London, who are the people that are separated from the success that is London.

“So you have that sort of agitation there and, of course, you have a mayor whose emboldened criminals by saying it’s going to take 10 years to solve – by saying he’s done his bit.

“In my opinion, as a leader, you’ve never done your bit.

“Even if crime is low you still make sure you push to keep it that way. 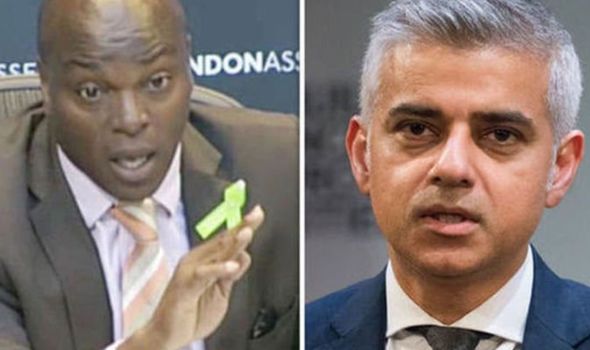 “The combination of not taking responsibility, not backing the police and not telling criminals that you want to put them under pressure…”

As President Donald Trump arrives in the UK, Sadiq Khan has faced even more criticism over his leadership – not least from the president himself.

Mr Trump tweeted on Monday morning: “Sadiq Khan, who by all accounts has done a terrible job as Mayor of London, has been foolishly ‘nasty’ to the visiting President of the United States, by far the most important ally of the United Kingdom.

“He is a stone cold loser who should focus on crime in London, not me.

“Kahn reminds me very much of our very dumb and incompetent Mayor of NYC, de Blasio, who has also done a terrible job – only half his height.

“In any event, I look forward to being a great friend to the United Kingdom, and am looking very much forward to my visit. Landing now.”

He blasted: “I think what the Mayor of London said was deeply disgraceful. Mr Trump is the democratically elected president of our closest ally.

“I think that Mr Khan demeans his office and demeans the nation.”