Police have closed the platform off to the general public after protesters from Climate Extinction Rebellion stormed the train. There are 30 to 40 police officers in the station and lots of station staff. Passengers are able to get off trains but no travellers are allowed onto platforms to join the train.

Protesters are silently holding their banners.

Climate Extinction Rebellion have caused massive disruption around the UK in the last few weeks. Groups of people have taken to the streets and blockaded traffic in a number of cities in a bid to raise awareness of the growing climate crisis.

Campaigners warned they would disrupt the London Underground to “highlight the emergency of ecological collapse”. 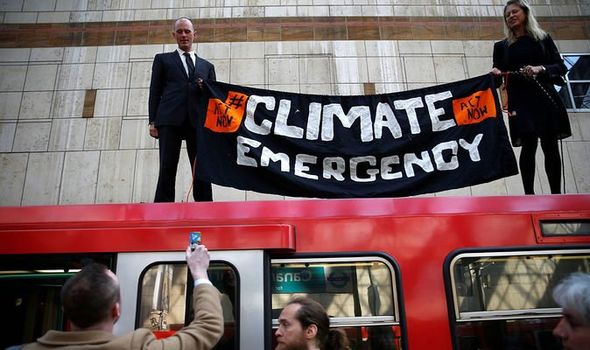 One passerby told Express.co.uk: “There are police officers everywhere. They are blocking off the station.

“Trains are still pulling in and out of the platforms.

“They look to be on top of the train to Lewisham. They’re not saying anything, just silently holding a banner.”

This is a breaking story.. refresh for updates

Young woman fighting for her life after being shot in London