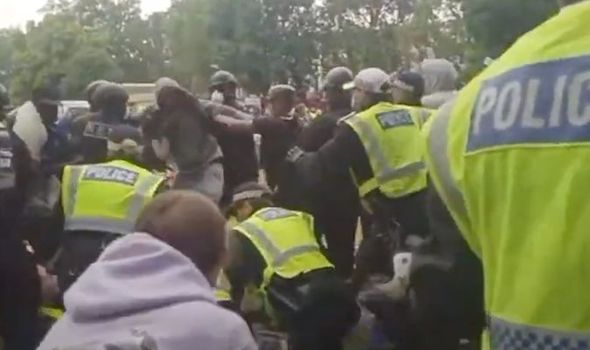 The police were also videoed dismantling the camp while clashing with members of the group.

One person can also be seen being detained by officers as they tried to move the group away from the camp this morning in Shepherd’s Bush.

The officers were part of the Met’s tactical Support Group who arrived to clear the so-called ‘Lovedown’ camp.

A Met Police statement said: “On Thursday 17 June officers attended Shepherd’s Bush Green, W12 to support the National Eviction Team as they carry out an eviction following the receipt of a possession order from the High Court by the Hammersmith and Fulham Council.

“Officers were there in order to prevent a breach of the peace, assist with any obstruction issues and deal with any criminal matters.”

It is thought some of the demonstrators have managed to remain in the area despite the police operation.

The High Court provided the possession order earlier this week, while bailiffs had also gathered to clear the scene.

Nicola Sturgeon doubled down on swipe at Kate and William: ‘I have to be clear!’

Tens of thousands rally in Armenia as ex-president elected PM