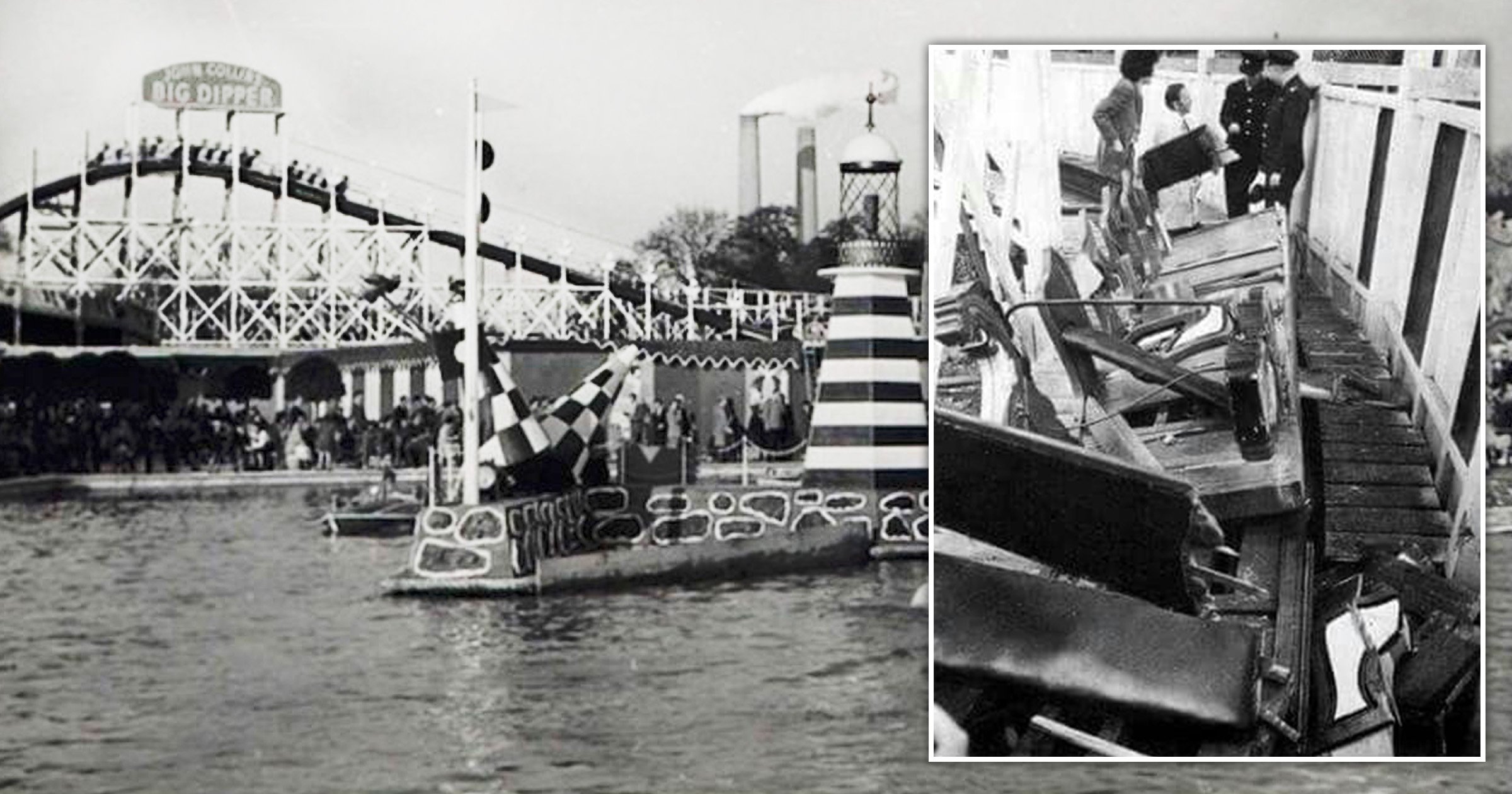 But for the survivors of the crash, the memories are as vivid as ever.

The Battersea Park Fun Fair, opened in 1951, was hugely popular with families and teenagers for days out.

Its star attraction was the Big Dipper, known as the ‘London Eye of its day’ for bringing people to the city.

A malfunction caused the wooden rollercoaster to break loose from its haulage rope and speed backwards down the track.

An emergency break failed to work and the ride derailed on a sharp corner.

The lower carriage was ‘crumpled’ by the others due to the sheer force of the impact.

Two teenage boys and an eight-year old girl died at the scene, and two other children died due to the severity of their injuries.

One of the victims was 15-year-old Alison Comerford. She had survived the crash but became stranded on a wooden walkway 15 metres above the ground.

She leaned on a wooden barrier for support but it gave way and she fell to the ground.

Alison had been visiting the park with a group of friends including Liz Haigh-Reeve, who had turned 15 that day.

She told Metro.co.uk: ‘It’s hard to believe I’ve had 50 more years of being alive than my friend Alison.

‘There are still freeze photos in my mind of what happened that day, and I still struggle to cope.

‘I left home at 16 after my GCSEs. Alison’s parents owned a shop in the village we lived in and I just couldn’t face them anymore. They were always so kind, but it felt too much. I just couldn’t stay there.

‘The accident happened on my 15th birthday, and not a single birthday has gone by when I’ve not thought about the crash and about Alison.’

Many of the crash’s survivors struggle with Post Traumatic Stress Disorder (PTSD) and anxiety.

The majority had no mental health following the incident, those without injuries were expected to simply make their own way home and move on.

Carolyn Adamczyk, who was 14-years-old at the time, was also on the Big Dipper when it crashed.

She had reached out to try catch Alison as she fell, but had been unable to save her.

After the crash, she developed a thyroid condition which required an operation in 1977.

She was told it was unusual for someone as young to have the condition, and that it was possibly caused by stress.

Carolyn was also diagnosed with PTSD around 2004, following a breakdown.

‘I have now lived with the memory of the tragedy for 50 years and still get flashbacks,’ she told Metro.co.uk.

‘I have only learned recently that the girl I saw fall was called Alison, and she was sitting in front of me not beside me, I still feel the rush of air as I tried to stop her from falling and the terror of nearly going over with her.’

No blame was ever attributed for the Battersea Funfair Disaster, despite the fact prosecutors described the ride as a ‘death trap.’

Three men had been charged with manslaughter, but were cleared in 1973.

The court heard that, after a fire had damaged the ride in 1970, a 50-year-old second-hand stock had been bought to replace it.

And the wooden structure surrounding the ride itself was said to be ‘rotted and unsafe’.

Carolyn feels like the entire crash was ‘covered up.’

She said: ‘It was discovered that there were 66 faults with our ride, but no one was held responsible, no prosecution was successful.

‘I have never had an explanation of why we were allowed to ride on a death trap, had no help to get out from the wreckage and have never had even an apology for something that has affected my whole adult life.

Her comments were echoed by Liz, who gave evidence in the Old Bailey at the age of 15.

She said she was ‘furiously interrogated’ by the late QC Gary Carmen.

‘There was never any sense justice had been done,’ she added.

The Big Dipper was closed and dismantled following the crash.

Today, many of the survivors struggled to ever return to Battersea Park.

One man, now a taxi driver in the city, declines trips to the green space, taking customers instead as far as Albert Bridge.

Tomorrow afternoon, survivors will gather to pay tribute to the victims of the crash.

They are campaigning for a physical memorial to remind people today of the tragedy.

Trees will tomorrow be planted which are hoped to bloom at the same time every year – on May 30.

The survivors have also been working to raise awareness of the lasting mental health effects of traumatic events.

It is a call which has been echoed by Battersea MP Marsha de Cordova who will attend tomorrow’s event.

She is backing the survivors in their bid for a permanent memorial to the crash victims and hopes for a ‘new legacy’ to be created for the ‘largely forgotten’ event.

She told Metro.co.uk: ‘I believe that it is now imperative that we focus on creating a new legacy for victims’ families and survivors.

‘I fully support their long-term call for a permanent memorial in the park at some point in the near future.

‘It also important to focus on the hidden mental health trauma of this tragedy which has had a detrimental impact on the well-being of the survivors.

‘Many have spoken to me about the mental health issues they have endured over the last 50 years as result of not being given appropriate care or support. In fact, the organising of this event has brought back the trauma of the tragedy for some.

‘We need to take urgent action and that’s why I am calling for better mental health services and support for children and young people dealing with long term trauma.’

‘I won’t give up on Archie!’ Mum defiant as judge rules life support should end