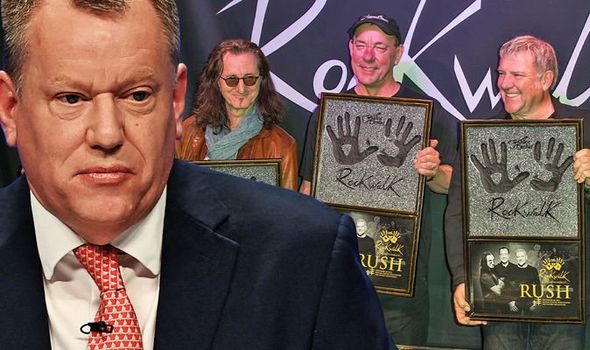 The French President was forced into a humiliating climbdown last night over France’s perceived lack of access to UK waters, after the EU refused to support them. Independent research site Facts4EU noticed that Lord Frost’s Twitter bio included the phrase: “You don’t get something for nothing, you can’t have freedom for free.”

It said it believed the minister was a “secret admirer” of Canadian rock band Rush, and that the line was an homage to their 1976 song “Something for nothing”.

Facts4EU suggested they were “words of optimism” and might represent “a new side” to the Brexit Secretary.

Lyrics for the Rush song include the lines: “Waiting for the winds of change / To sweep the clouds away / Waiting for the rainbow’s end / To cast its gold your way / Countless ways / You pass the days.

Mr Macron’s retreat came just hours before his own deadline to resolve the dispute with the UK over fishing licenses for French vessels.

He announced he would not go ahead with the threats he had previously made.

Following the UK’s withdrawal from the EU, the European nation made repeated threats over a perceived lack of access to British waters for its fishermen.

After seizing a British fishing boat in French waters near Le Havre last week, France said it could stop UK boats landing in its ports if the row over fishing licenses for French vessels was not resolved by midnight on Monday night.

However, after the UK Government threatened to start “rigorous” checks on EU fishing activities in retaliation, just hours before his own deadline, the French President climbed down.

Instead, he said that discussions between the two nations and the European Commission would “continue tomorrow” and ruled out any reprisals “while we’re negotiating”.

“Monsieur Macron’s humiliating climbdown and withdrawal of the threat of action against British fishermen and truckers did not happen at the proverbial ‘five-to-midnight’, but it wasn’t far off.

It continued: “Some readers might feel that it would have been more appropriate for Lord Frost to have insisted that the diminutive Frenchman must come to London, if he has something to say.

“This, however, might not have been the appropriate diplomatic course of action.

“Perhaps Lord Frost feels that the French have suffered enough humiliation for one week.”

Mr Macron confirmed yesterday that negotiations between the UK, France and the European Commission over the dispute would continue as planned today.

Lord Frost is due to meet his French counterpart, Clement Beaune, in Paris on Thursday for further discussions.

In a statement released last night, a UK Government spokesperson said: “We welcome the French government’s announcement that they will not go ahead with implementing their proposed measures as planned tomorrow.

“As we have said consistently, we are ready to continue intensive discussions on fisheries, including considering any new evidence to support the remaining licence applications.”