The HGV got wedged under the structure near Plymouth train station. Photographs show recovery staff attempting to remove the large vehicle after it got jammed.

The crash caused major delays and congestion in and around Plymouth city centre.

Buses were delayed and diverted throughout the afternoon, reports Plymouth Live.

A Plymouth CityBus spokesperson had said: “Due to a HGV being stuck under the Railway Station bridge, we are expecting heavy delays on all services inbound to Royal Parade going via Alma Road. Sorry for any inconvenience caused, and thank you for being patient with us in in this unforeseen circumstance.”

Traffic reporting service Inrix first reported to incident at 12.59pm. It reported: “Delays due to broken down lorry stuck under the railway bridge on A386 Pennycomequick Hill Southbound after Central Park Avenue (Pennycomequick roundabout).” 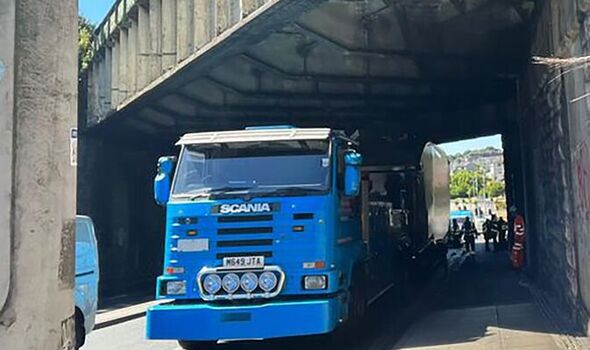 Police were called to the collision at around 1pm.

A spokesman for Devon and Cornwall Constabulary said earlier: “We received reports a lorry had collided with a railway bridge and become stuck at the Pennycomequick Roundabout, Saltash Road, Plymouth, at around 12.50am.

“The road is blocked and traffic said to be building in the area. Incident ongoing.”

Several roads meet at Pennycomequick Roundabout, including A386 which goes south into the heart of Plymouth and north into the Milehouse, Home Park, and Manadon neighbourhoods before leaving the city.

When a lorry crashed into a railway bridge in Lewisham, southeast London, in April, the HGV became distorted. Traffic came to a standstill and a number of roads were closed in the area due to the incident.

The incident also left thousands of toilet rolls exposed to the elements as photos from the incident show the lorry’s container was ripped open.