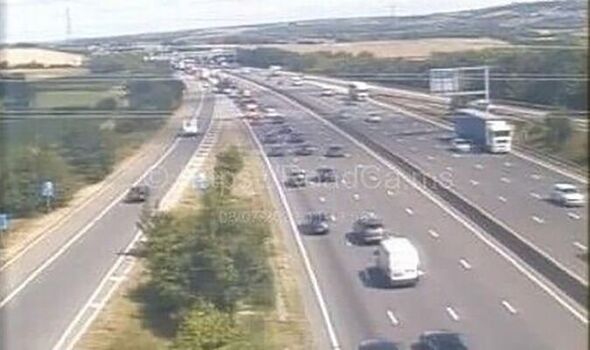 Two lanes of the northbound carriageway are closed between junction 29 for Chesterfield, Derbyshire, and junction 29a for Duckmanton in the same county. Three vehicles have been involved in the smash, which happened near junction 29a, and an oil spillage has reportedly compounded matters.

Highways Agency said traffic officers are at the scene and have advised drivers to allow extra time – reportedly around 60 minutes – for their journeys.

Debris is being cleared off lanes three and four during the recovery operation, Derbyshire Live reports.

Diversions are in place but there are around six miles of queues, which go back to around junction 28 for Mansfield, which is in Nottinghamshire.

Southbound traffic is also slow due to onlookers, with congestion back to junction 30 for Barlborough, Derbyshire.

Motorists heading north are advised to leave at junction 28 and use the A38 westbound to Alfreton, where they can use the A61 northbound through Higham and Clay Cross areas of Derbyshire.

They are then encouraged to go through Chesterfield itself and out onto the A619 eastbound, which reaches M1 at junction 30 for Barlborough and Worksop, Nottinghamshire.

Southbound motorists are not advised to divert as the traffic eases quickly past junction 30.

A National Highways spokesman confirmed a crash is being dealt with.

“There are currently delays of 60 minutes and approx. nine miles of congestion. Road users are advised to plan their journeys in advance, allow extra time and consider alternative routes if possible.”

It is unclear if anyone has been hurt in the accident.

Prince Louis loss: How Kate’s youngest will lose out on playmate due to Prince Harry