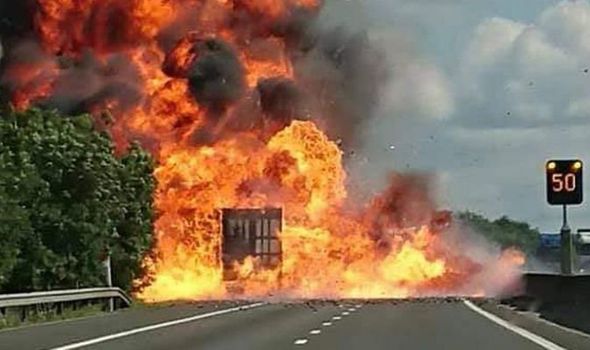 Dramatic photos show fierce flames roar from the HGV on the M11 near Stansted Airport, Essex, yesterday afternoon. Emergency services dashed to the scene but miraculously no one was seriously hurt.

Essex Live reports traffic had been diverted through Royston on the A505 and A10.

But Highways England tweeted this morning: “M11 J9 to J8 southbound – the road has re-opened with lane 2 of 2 having to remain closed due to the fire damaged central safety barrier – please travel through this area with care.”

One lane remains closed northbound but traffic is now moving freely along the stretch.

Speaking last night, Dave Bond, from Essex Fire and Rescue Service, said: “The articulated lorry was carrying aerosol cans which exploded and scattered across both side of the carriageway. Thankfully the driver was not badly hurt.

“I must praise crews who worked extremely hard to establish a water supply in such a remote location and quickly get the incident under control.

“Unfortunately, the road will be closed for some time due to the extent of the fire.”

Pubs 'should shut at 6pm as 10pm curfew doesn't work'

Nigel Farage: ‘Are you deluded?’ Brexit Party boss in furious row with caller over no deal