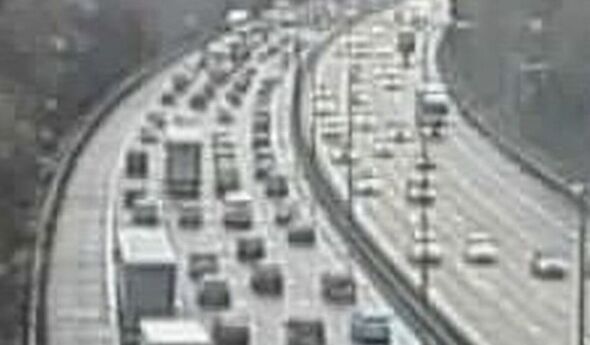 Flooding has plunged the M25 into chaos ahead of Christmas weekend.

The closures have caused several miles worth of congestion as authorities expect millions of people to hit the road today.

A National Highways spokesperson said: “The M25 clockwise between J11 (Woking) and J12 (M3), lanes 3 and 4 (of 4) are closed due to flooding following heavy rainfall in the area.

“There is currently approx. 7 miles of congestion on approach, causing delays of 30 minutes above usual journey times.”

The authority added on Twitter that traffic has stopped on the route to “allow our service providers to clear the standing water from the carriageway”.

They added: “There is approx. 10 miles congestion on approach, causing delays of 30 minutes above usual journey times.”

The AA’s Roadwatch route planner shows that other sections of the M25 have also closed due to the floods.

Drivers reported that a lane has closed on an entry ramp at the J1A A206 on the M25 anticlockwise.

Traffic has also slowed on that stretch of the M25, with lane one closed on the slip road leading from the roundabout.

Rescuers Race Against Time to Find Survivors After Quake in Turkey