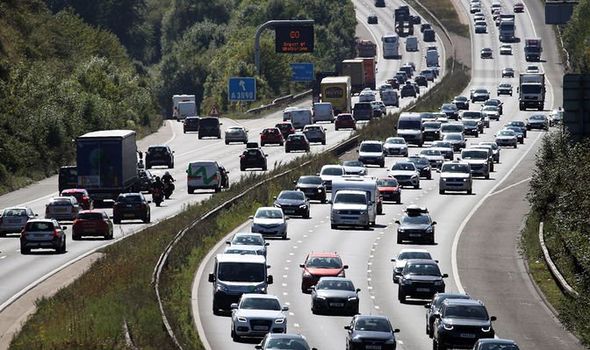 Two lanes of the M3 are shut southbound between junction 11 for Winchester south and junction 12 for Eastleigh in Hampshire after the “multi-vehicle collision”. Traffic is at a standstill and has already reached junction 9 for central Winchester and the A34 link.

An update from Travel update service INRIX reads: “Two lanes blocked and queueing traffic due to accident on M3 Southbound from J11 A3090 (Winchester South) to J12 A335 (Eastleigh). Lane ones and two (of three) are blocked.”

And drivers face delays of an hour, reports Hampshire Live.

At least three cars are involved in the smash and South Central Ambulance Service has confirmed a crew is at the scene.

An alternative route takes drivers off at junction 9, through central Winchester and on local roads through Shawford and Otterbourne to junction 12.

However, authorities say these roads are heavily congested as a result too.

Stagecoach South tweeted: “Due to an accident southbound on the M3, town centre traffic is starting to build up.”

It comes after a crash completely closed part of the M6 in Cheshire.

Motorists face delays of around one hour as the northbound carriageway is shut between junction 17 for Sandbach, Cheshire, and Holmes Chapel in the same county. There are currently five miles of traffic with queues almost reaching junction 16 for Crewe and Barthomley.

According to the traffic monitoring service Inrix a lorry has veered off the road and gone up the grass verge.