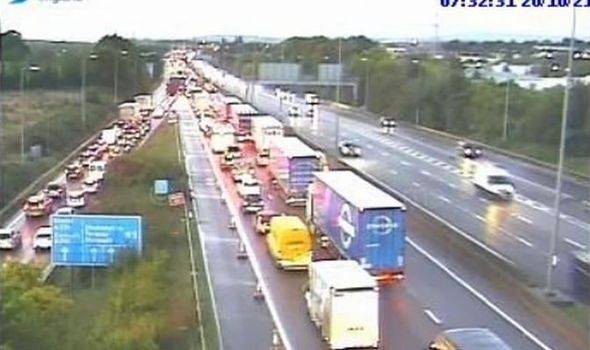 Emergency services have raced to the scene of the crash, which has happened on the southbound carriageway just past junction 31 for the A38 link and south Exeter, Devon. Queues are back to junction 29 for north Exeter and Honiton in the county.

The single-vehicle collision happened during torrential downpours and thunderstorms, which swept across the UK from the west overnight.

Two lanes will be shut on this stretch of motorway for three hours, according to Devon Live.

Drivers are advised to use the single lane but some motorists have left at junction 29 to use local roads through central Exeter, including Rydon Lane and the A379 southbound, and so these are congested.

Northbound traffic is slow due to onlookers, with tailbacks reaching Bickham House on the A38 north.

The A30 in both directions around Exeter is busy as a result.

A spokesman for Devon and Cornwall Police said: “Police were called to reports of a single-vehicle road traffic collision involving a car on the southbound carriageway of the M5 between junctions 30 and 31, at around 6.30am today [20 October].

“One person was injured but the extent of the injuries is currently unknown.

“Two lanes have been closed and one is expected to remain so for at least two-three hours.

“Emergency services are at the scene.”

An update from traffic-monitoring system Inrix says: “Queueing traffic for seven miles due to earlier accident, a car involved on M5 Southbound from J30 A376 Sidmouth Road (Exeter / Service Areas) to J31 A38 (Okehampton turn off).”

Traffic cameras show bumper-to-bumper jams at around 9.15am.

The downpours have led to traffic chaos elsewhere in the country, including on the M25 in Essex where a lorry and a car have collided.

Brexit: Government to slash up to 90% of trade tariffs if UK leaves EU with no deal