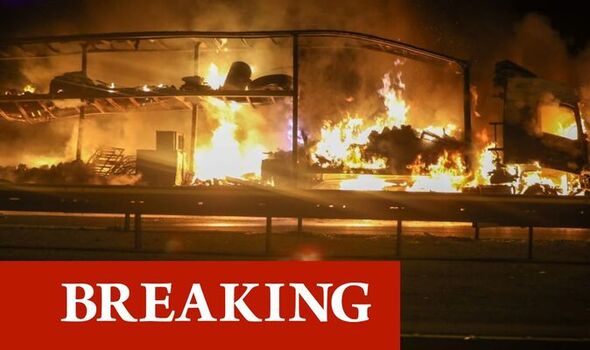 Delays on approach to the scene are still likely to hit this morning’s rush hour traffic, however, as a number of lanes remain shut.

National Highways this morning reported that three lanes were shut on a stretch of the motorway.

It said: “Lanes one, two and three are now closed on the M60 clockwise between Junction 23 (Ashton Under Lyne) and Junction 24 (Denton) for recovery of the HGV which caught fire earlier this evening.

Greater Manchester Fire and Rescue Service was called out at 10.25pm last night to reports of a vehicle fire on the motorway involving an HGV on the hard shoulder.

This, they said, was “generating a large plume of smoke”.

A spokesperson added: “Four fire engines from Ashton, Stalybridge and Hyde fire stations were quickly mobilised to the scene, together with support appliances, and firefighters wearing breathing apparatus are currently tackling the fire using three hose reels and fire beaters.

Three lanes were still closed by 7.20am, by which time National Highways reported delays of 30 minutes were being added to journey times.

Manchester Evening News suggested these were already up to 40 minutes, instead.

Congestion was already backing up to Junction 22 for Failsworth before 8am.

When the recovery began last night, all four lanes were closed for around two hours.

The cause of the fire is currently unclear.

Drivers were advised to allow for additional journey time.