PARIS — After weeks of national turmoil spurred by the Yellow Vest protests, President Emmanuel Macron on Tuesday kicked off what he intended as a peacemaking exercise, and what the French government billed as the “Great National Debate.”

In a sort of two-month talkfest, the French are supposed to air their grievances, all shepherded by the government and local mayors. A cultural fondness for talk, and more talk, will get its consecration, with the hope that calm will follow.

For the moment, however, France is anything but calm.

Apart from the random violence and vandalism in the streets of Paris and other French cities, there have also been less evident and more targeted threats, and violence, in an atmosphere of increasing menace.

Mr. Macron’s deputies in parliament have become the front-line proxies for Yellow Vest hatred of the president. Dozens of parliamentarians representing his political movement La Republique en Marche, or Republic on the Move, have been threatened, their houses and offices vandalized, and anti-Semitic and racist insults hurled at them.

Television journalists have also been targets — beaten, threatened, kicked, punched and prevented from doing their work.

Even Mr. Macron’s rare public appearance — they have been deemed too risky since the beginning of the Yellow Vest movement — was made under virtual siege. 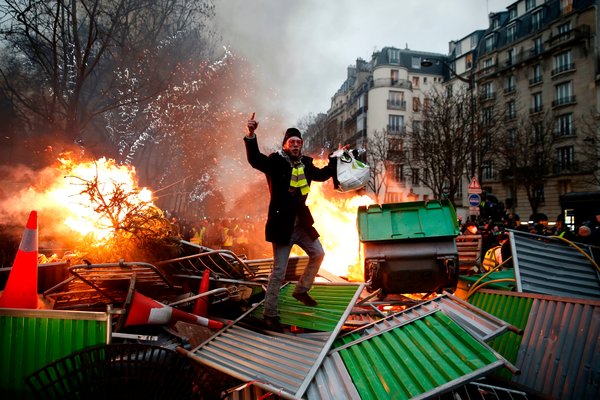 The police blockaded the village where he was to speak, Grand Bourgtheroulde, banning most traffic, preventing Yellow Vests from reaching it, and screening those leaving the highway and entering the village.

It was rural France, but tear gas, a regular feature of the protest movement, was deployed to push back some who managed to get through. Wagonloads of police officers were stationed in the woods surrounding the village.

Mr. Macron, tagged as “President of the Rich” by the angry Yellow Vests, was taking no chances. The current situation, he told the mayors, “presents our country with a lot of challenges.” That was something of an understatement.

Still, the French media noted, the president had spoken the words “Yellow Vest” in public for the first time — two months after the movement began — an omission seen as a sign of his often-noted remoteness.

The Yellow Vest movement, set off by a fuel tax increase, has spawned a rare climate of anti-establishment hatred in France, with some historians comparing it to the atmosphere of the 1930s, when fascistic leagues threatened France’s democracy and marched on the National Assembly.

The personal targeting — members of parliament say some 50 of them have been threatened by the Yellow Vests — is unprecedented in the country’s modern era, according to historians.

“Never in the 5th Republic has a social movement like this one reached this level of physical violence,” said a historian of France’s institutions, Christophe Bellon of Sciences-Po.

“This is new, in terms of the density of the violence,” Mr. Bellon said. “It’s a resurgence of anti-parlimentarianism, and it’s the expression of a malaise, an uneasiness, in France.”

Television journalists now travel with security details. One guard was taken to a hospital in Rouen this weekend after angry Yellow Vests set upon the journalists he was trying to protect, punching and kicking.

Another team from BFM-TV, the dominant all-news channel and a particular target of the Yellow Vests hatred for what is perceived as bias, was force-marched from the city of Bourges as insults rained down, in a scene filmed by the Yellow Vests.

BFM journalists staged a one-day walkout, refusing to cover the movement because of the threats. A television journalist in Pau was punched, on camera. A reporter for La Dépêche du Midi in Toulouse was threatened with rape and had to be rescued by Yellow Vests members not sympathetic to violence.

But the attacks on the country’s representatives have been the most sustained. They have been threatened in person, at their offices, and at their homes.

“What is an African’s right to get mixed up in French problems?” began a letter earlier this month to a member of parliament, Jean François Mbaye. “We’re simply going to put a bullet in your head, the current climate is favorable,” it said. “You’re going to die.”

Similar racist threats were made against two other members of African origin, including Hervé Berville, who “unfortunately escaped the machetes of Rwanda.”

Jacqueline Dubois, another parliamentarian, woke up to find her car and her husband’s in flames outside their rural Dordogne residence after threats broadcast online from a Yellow Vest.

“Macron the Jews’ whore,” was scrawled on the office of the parliamentary deputy Bruno Studer. In November, 20 Yellow Vests tried to force open the door of deputy Christophe Lejeune’s house in the Haute-Saone.

A week ago an obscene, violent threat was made by mail against Aurore Bergé, “terrifyingly original in the torture they want to inflict on me,” Ms. Bergé wrote in a message on Twitter. “It is unacceptable to want to make us live under threat.”

Mr. Bellon, the historian, declined to see the threats against Mr. Macron’s deputies as a wholesale rejection of the French republic — for now. “It’s not a rejection of democracy. The republic is still pretty robust,” he said. “But — we don’t know if it will widen.”

Mr. Macron’s parliamentary leadership has sought to tread a delicate line, denouncing the violence without appearing to reject the Yellow Vest grievances, which continue to have the support of a majority of the French.

On Tuesday, Gilles Le Gendre, the leader of Republic on the Move in parliament, gingerly blamed the Yellow Vests for the incidents targeting his members. in a news conference at the National Assembly.

“It’s not just a social movement,” he said at a news conference at the National Assembly. Some in it “have political intentions, with a desire to mix it up, as we’ve seen on these Saturdays” — the days of the mass demonstrations. But, Mr. Le Gendre told reporters, “we really just want to move on.”

That is clearly Mr. Macron’s desire as well. Still hovering around 30 percent in opinion polls — a slight rise — he called Sunday in an open letter to his fellow citizens for “a new contract for the nation.”

He is banking that the Great National Debate will produce minimal guidelines for policy that will have some degree of national assent. Yellow Vest leaders immediately dismissed the letter on Facebook pages.

Mr. Macron set out what he regards as the central questions on the minds of the French — questions that are suggested by hundreds of so-called “Grievance books,” a term that goes back to the beginnings of the French Revolution.

The books have now set out in mayors’ offices across the country for the citizens to fill in. Tax cuts are clearly the popular priority.

“How can we make our fiscal system more just and more efficient?” Mr. Macron asked in his letter. “What taxes should we cut?”

But he warned the French, underlining a paradox that many have found at the heart of the Yellow Vest movement: “We cannot, in any event, pursue tax cuts without cutting the overall level of public spending.”

He continued, taking a risk in the live-wire French context, “Should we cut some public services which are out of date or too expensive in relation to their usefulness?”

48st man winched from his flat for hospital trip