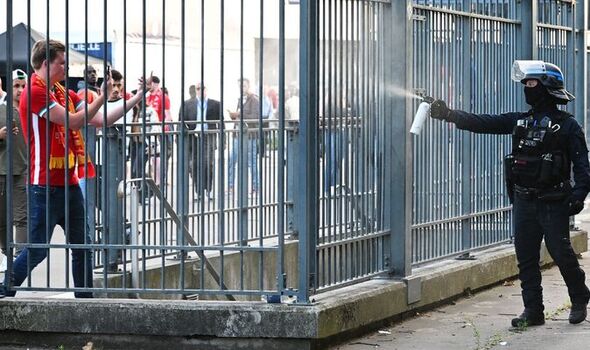 The spokesperson said on Wednesday, June 1 that “there was no drama” at the final between Liverpool FC and Real Madrid, but admitted that the match could have been handled better. They added that it could not be denied that fake tickets contributed to crowd disorder at the match last Saturday.

The spokesperson also said that Mr Macron has “full trust” in his interior minister, Gérald Darmanin, who had alleged that there was ticket fraud at “an industrial level”.

Fans, politicians and authorities in the UK have criticised the policing of the final after people were tear-gassed and involved in violent clashes.

Liverpool lost to Real Madrid 1-0 at the Stade de France, just north of the city, on Saturday night.

The match was delayed by more than half an hour after French police tried to hold off people trying to get into the ground.

Some fans were kept out of the stadium for large swathes of the first half with fans accusing officers of pointing guns at them after the game.

Fans also expressed disgust at elderly fans and children getting caught up in the mayhem, which a Liverpool supporters trust dubbed “shambolic and extremely dangerous”.

It is believed that the UK’s ambassador to France has contacted the French Ministry of Interior calling for an urgent investigation.

Uefa said turnstiles were blocked because some Liverpool fans had bought “fake” tickets, leading to a build-up.

Liverpool released a statement calling for a thorough investigation into events outside the ground.

The front page of newspaper Liberation on Wednesday features an image of Mr Darmanin with a pinocchio-style nose along with the headline “Darmanin remakes the match”.

Mr Darmanin claimed as many as 40,000 Liverpool fans turned up for the game with fake tickets after an “industrial and organised fraud”.

Elise Stern, a journalist for French TV channel TF1, told Liverpool Echo: “The media have access to the social networks and all the videos and the footage posted online. For any event, especially when there are two different narratives, you would want to question the numbers.

“I think the numbers of 30-40,000 supporters being in the area without tickets or with fake tickets, this number is quite huge when you know the capacity of the Stade de France. So obviously you would want to question and find evidence for that.”

Mr Darmanin and French minister of sport Amélie Oudéa-Castéra are due to appear before a hearing at the French Senate on Wednesday to explain what went wrong.

It comes after Ms Oudea-Castera asked Michael Cadot, the inter-ministerial delegate for large sports events, to produce a report into the matter within 10 days.

Meanwhile, former Tory leader Lord Howard of Lympne has called for an “independent” and “thorough” investigation into the final, which he attended.

Asked about the French appearing to blame British fans, Lord Howard told BBC Radio 4’s World At One programme: “I think they are talking nonsense. The first thing that Uefa put on the screen was that the kick-off time would be delayed because of the late arrival of fans. Fans did not arrive late.

“There was no late arrival of fans. The problem was that the gates were closed, I was in a queue, in a crush, with my wife, which could have become very dangerous. And we were waiting for the gate to which we’d been told to go and which was the right gate according to our tickets to open and it wasn’t opened.

“Now, it may be the case, I don’t know that there was some people with fake tickets, they may not have known they were fake tickets. That’s something that you anticipate at events of this kind and you make arrangements, so that if someone presents themselves with a fake ticket, you tell them to stand aside and you let the people with genuine tickets in.”

Sebastian Kurz set to return to power in Austria after ousting