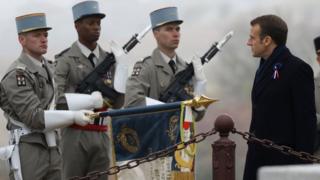 French President Emmanuel Macron has warned that Europeans cannot be protected without a “true, European army”, as he marks the centenary of the World War One Armistice.

On a visit to the former Western Front in Verdun, he said Russia had shown it could be a threat and Europe had to be able “to defend itself better alone”.

Russia’s president will be among world leaders marking the Armistice in Paris.

German Chancellor Angela Merkel backed the idea of an intervention force in June, but said it would have to be part of “the structure of defence co-operation”.

The UK, while in favour of such a joint force, is opposed to a European army, because of the potential risk of creating a parallel structure to Nato.

President Macron has already warned that Europeans can no longer rely on the US to defend them, and he revived the theme on Tuesday, in response to President Donald Trump’s decision to pull out of a 1987 nuclear treaty with Russia, banning medium-range ground-launched missiles.

“We have to protect ourselves with respect to China, Russia and even the United States of America,” he told French radio station Europe 1.

“Who is the main victim? Europe and its security. I want to build a real security dialogue with Russia, which is a country I respect, a European country – but we must have a Europe that can defend itself on its own without relying only on the United States.”

Will there be a European army?

There is no evidence that any group of European countries has the political will or economic muscle to spend sufficiently on defence to make up for the United States’ raw power.

Indeed the deployment of troops “into harm’s way” remains the ultimate sovereign decision of a national government. There is no “Nato army” today – merely an alliance of national components trained and accustomed to operating together.

President Macron’s call for a greater European effort in defence derives from two sets of factors: his support for the greater European project on the one hand, but also horror at much that the Trump Administration is doing on the other, with its overturning of treaties and so on. 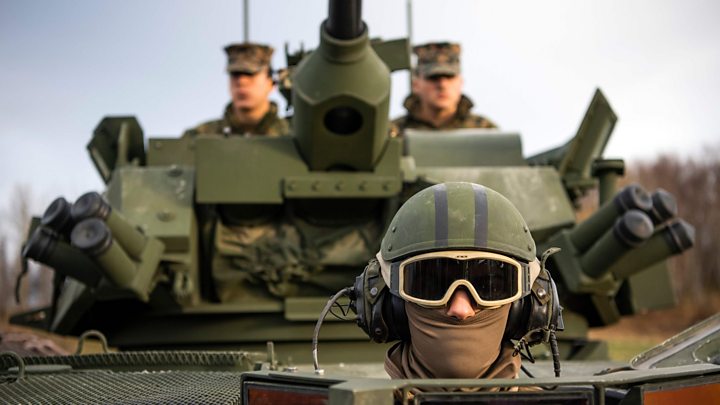 But could Europe really stand up to Russia alone? And what of the longer-term threat from China?

The US relationship may be problematic but it could be becoming more important than ever.

President Macron’s battlefield tour will take in the River Somme as well as Verdun.

Last week he warned of the “leprosy” of nationalism spreading worldwide and declared that he had been struck by the similarities of current times and the period between World War One and World War Two.

UK Prime Minister Theresa May will join Mr Macron on Friday at the Somme while President Trump will join dozens of world leaders for Sunday’s ceremony at the Arc de Triomphe in Paris.

During his interview on Tuesday, Mr Macron warned that there was anger against a “too ultra-liberal Europe that no longer allows our middle classes a decent living”.

He spoke of Europe that was becoming increasingly fractured and singled out the UK’s vote to leave the EU as part of that disenchantment.

President Macron’s opponents have accused him of being out of touch with the everyday problems of French voters, and have called for a national protest against higher fuel taxes on France’s roads on 17 November.

The latest opinion poll ahead of May 2019 European Parliament elections suggests Mr Macron’s LREM party is trailing the far-right National Rally party for the first time.

Coronavirus map LIVE: Vaccine to be rolled out to UK in just three months – leaked memo