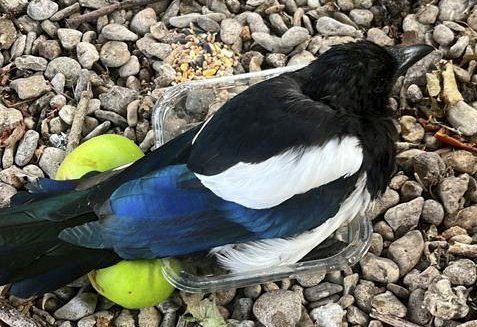 A magpie was left looking worse for wear after it got drunk eating one too many fermented apples from a woman’s back garden.

Joana Leal, 29, found the bird after a friend, who had been staying with her, sent her a video of the creature flopping around, unable to fly – or even stand – after binging on the apples.

The tattoo artist who lives in Bicester, Oxfordshire, had forgotten to pick up the apples so the magpie, which lives in a tree in her back garden, was able to get to them.

The pair called the RSPCA who told them to just let it sober up for a bit.

It turns out birds don’t fly as well while inebriated and aren’t able to easily avoid obstacles in flight.

Flying into windows and buildings when drunk can cause injuries and even death in some birds.

In warmer months, eating fruit and berries doesn’t usually pose a problem for birds. However, berries and other tree fruits can ferment in late fall and winter when the first frosts and freezes occur.

Later in the winter and early spring, the weather poses more problems for fruit-eating birds because of the natural temperature changes of the season.

The cold weather concentrates the sugar in berries and other fruits, and then when it warms up the speed at which the sugar breaks down is accelerated.

In these cases, the alcohol that forms in the fruit is more potent than it normally would be.

In humans, this would be like the difference between drinking beer and vodka — the vodka packs much more of a punch.

Joana said: ‘The RSPCA said it would be fine, that it needed to sober up and that magpies do this quite a lot.’

She added: ‘It was a juvenile. I could tell because it was tiny and it’s feathers were a little bit sparse.

‘It was just tumbling around and propping itself up on its wings. It seemed to be fine. It wasn’t scared or anything.’

Joana made a makeshift birdhouse using a plant cloche to protect the magpie until it sobered up.

The magpie stayed in the plant cloche for about three hours before it cleared its head and was able to fly away.

Nearly half of UK prisoners have keys to their own cells

Camilla children titles: Will her kids get titles when Charles becomes king?