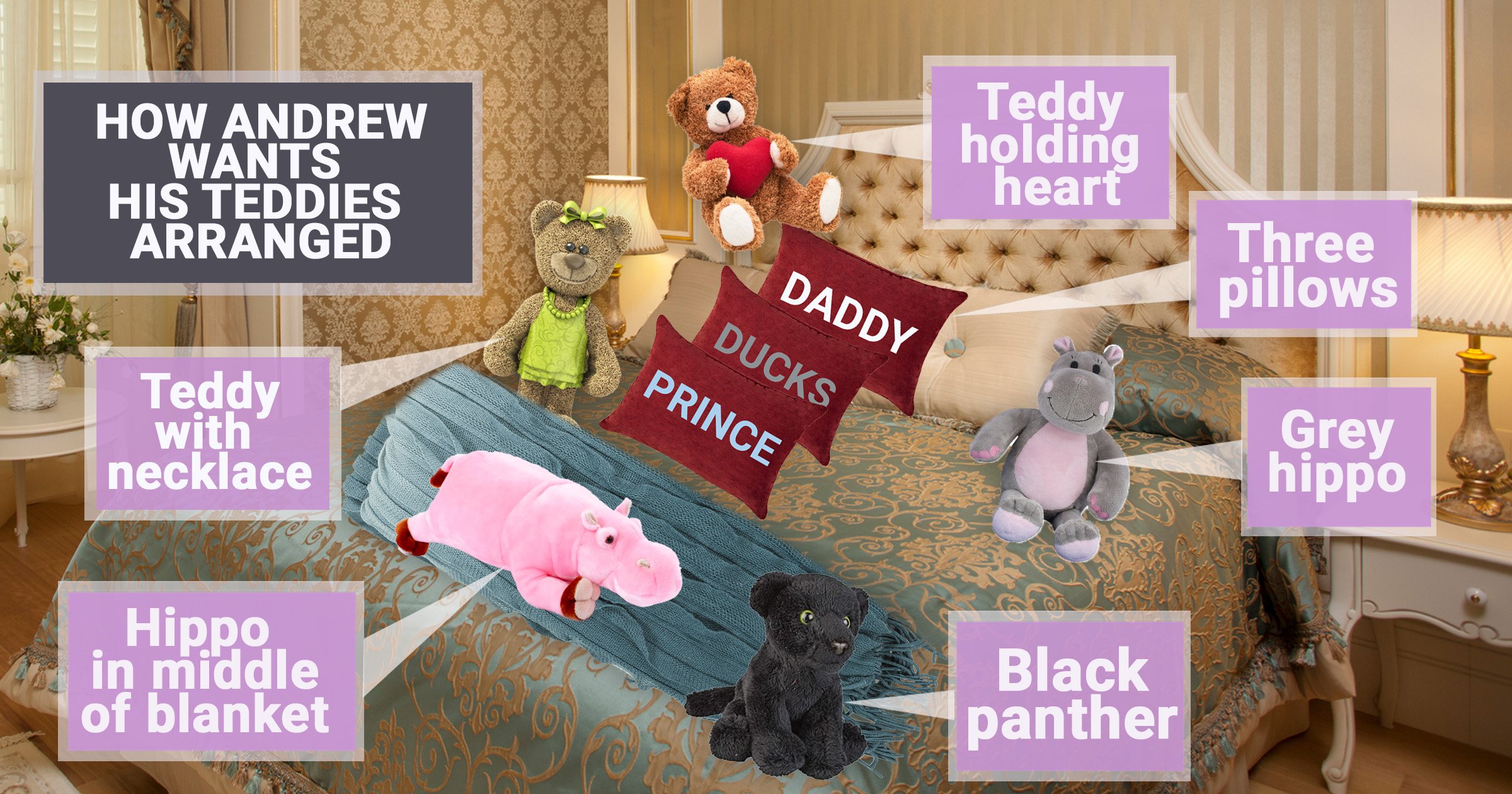 Prince Andrew’s cuddly toys had to be arranged in a certain way on his bed, according to a handwritten guide revealed by a royal insider.

A sketch shows exactly where a teddy bear holding a heart, two hippos, a black panther, a fur and three cushions with ‘Daddy’, ‘Ducks’ and ‘Prince’ on had to be placed.

An insider told The Sun: ‘It’s hilarious a prince of England would want his teddies on his bed.

‘You can imagine him crying, “Mummy, they haven’t put the hippos on my bed!” to the Queen if anyone got it wrong.

‘Maybe they were presents from his daughters or Fergie, but it’s still strange.’

They revealed laminated instructions were kept next to the Duke of York’s Buckingham Palace bedroom for when he stayed there.

The list was entitled: ‘DOY bed: Points for turn down & making the bed.’

It read: ‘When the DOY is staying overnight, place one small teddy & cushion in the turn down.

‘When making the bed, place the teddy & cushion next to the teddy on the left- hand side with the necklaces on.’

Underneath in capital letters, it said: ‘Do not loose [sic] the teddy & cushion!!’

Another hippo teddy must be placed on a green throw at the foot of the bed and the ribbons of the fur must hang off his bed. Special cushions had to be arranged at the top.

Although Andrew lives with his ex-wife Sarah Ferguson at the Royal Lodge in Windsor, he had a suite of rooms in Buckingham Palace for overnight stays for when he was working in London.

It is thought his belongings were moved out during recent renovations at the Queen’s household.

It comes as former officer Paul Page, who worked in the Royalty and Specialist Protection Command for six years, revealed the prince would ‘shout and scream’ if his teddy bears were not arranged in the right way.

He said in an upcoming ITV documentary: ‘It had about 50 or 60 stuffed toys positioned on the bed.

‘Basically, there was a card the inspector showed us in a drawer and it was a picture of these bears all in situ.

‘The reason for the laminated picture was if those bears weren’t put back in the right order by the maids, he would shout and scream, and become verbally abusive.’

Writer Elizabeth Day, who saw the collection in 2019, said it seemed ‘rather strange that a grown man should be so amused by a stuffed toy’.

The ITV interview is expected to ‘unravel the story of how an entitled daughter of a billionaire sank into shame and disgrace through her friendship with paedophile Jeffrey Epstein’ as disgraced British socialite Ghislaine Maxwell awaits sentencing in the US.

It will also explore how Andrew became involved in the scandal as he faces his own civil court case brought by Virginia Giuffre, 38, who alleges she was sexually assaulted by him when she was 17.

The Queen has since stripped the prince of his military titles and royal patronages and said he will defend the case ‘as a private citizen’.

Prince Andrew has always vehemently denied any wrongdoing and also declined to comment on the claims made during the interview.

Ghislaine, Prince Andrew and the Paedophile will be aired on ITV tonight at 9pm.

Meghan Markle heartbreak: Duchess ‘not mentioned’ in UK plans – Will Meghan EVER return?

Princess Beatrice baby news: Picture of Sienna may be shared before Christmas