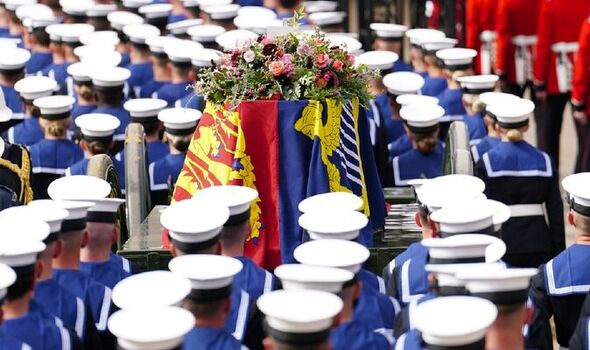 A man has been arrested by police after allegedly trying to jump the barriers as Queen Elizabeth’s procession went past. Police have said a man was arrested Parliament Street, close to the cenotaph on Whitehall in central London. Her Majesty’s coffin was being driven from Westminster Abbey before passing Buckingham Palace. It then travelled past the cenotaph, which commemorates the war dead. Express.co.uk has contacted the Metropolitan Police for comment.

The Queen’s coffin has been transferred into a hearse and is being taken to Windsor Castle for a smaller service at the royal residence later today.

At 4pm, a televised committal ceremony is taking place at St George’s Chapel, before a private interment service attended by senior members of the Royal Family.

Thousands of people have been lining the street to see the state hearse carrying the Queen travelled from Wellington Arch.

There were repeated cries of “hip hip hooray” and “God Save the Queen” as the vehicle drove past the mourners.

The start of the state funeral at Westminster Abbey had begun with a single toll from nearby Big Ben.

King Charles III – – along with the Princess Royal, Duke of York and Earl of Wessex – walked behind their mother’s coffin as it travelled from Westminster Hall.

Prince William walked behind the monarch’s coffin with his brother Prince Harry and his cousin Peter Phillips, following King Charles and his three siblings.

PMQs today: Five of the best lines from Boris and Starmer’s heated confrontation