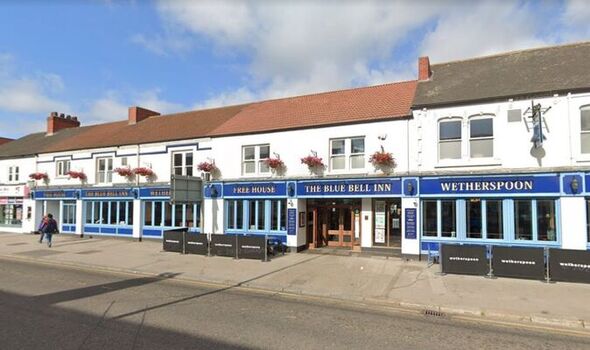 A man who was subjected to a brutal street robbery because he was “dressed smartly” says he was punched so hard he thought he had been hit by a car.

He had travelled to Scunthorpe, in Lincolnshire, for work and was “minding his own business” when the violent thugs attacked him.

In July 2021, the victim was near the Blue Bell Inn Wetherspoons pub on Oswald Road when Darren Dawson, 33, Thomas Mobbs, 37, and Zack Tingle, 27, approached him from behind.

They punched him several times in the head, knocking his glasses off and causing him to fracture his skull.

The victim was then led by Dawson, the “ringleader” in the incident, to a nearby cash machine, where he withdrew £40, reports Grimsby Live.

All three pleaded not guilty to the charge of robbery but were subsequently found guilty following a trial.

They appeared at Grimsby Crown Court for sentencing.

In a victim’s personal statement read out to the court, the victim wrote: “I was very lucky. I have a permanent dent in the front of my forehead. I was unable to go swimming or do any contact sports. After the incident I decided to work from home because I was shaken and shocked about what had happened.

“I don’t ever attend Wetherspoon’s [in Scunthorpe] anymore in case I bump into the suspects. I don’t even go into the town centre. I feel sorry for anyone who finds themselves in poor circumstances, including my attackers.

“No matter how tough someone’s life may be, it does not give anyone the right to attack someone from the back just because they are dressed smartly, as I was told by my attackers. For the sum of £40, why did they need to physically assault me and if it had caused a brain injury, would they have even cared?”

Mitigating for Tingle, Sarah Middleton told the court that he was not the ringleader in the incident, and is “very fearful for what the future holds” following the robbery, during which he was intoxicated – but he has now “cut alcohol out of his life”.

John Dunning, mitigating for Darren Dawson, said the defendant has “had this hanging over him for a very long time”, while Nigel Clive, for Mobbs, told the court his client is a “drug addict” who, when he is not taking drugs, appreciates his family and has taken active steps to combat his addiction.

Sentencing, Judge John Thackray KC told the three defendants that they are “equally responsible” for the attack.

Addressing the defendants, he said: “This is a man who, in his victim personal statement, has shown an incredible degree of compassion and understanding for those with lives less fortunate than him, mainly you. Nothing can justify what you did to him that day.

“He was minding his own business when you three attacked him from behind because he was dressed smartly. He thought it was children running up behind him, but it was you three. He thought he had been run over. Two of you delivered further blows to his head, four or five punches, one which fractured his skull.”

'She was playing one minute then collapsed': The kids fighting heart conditions