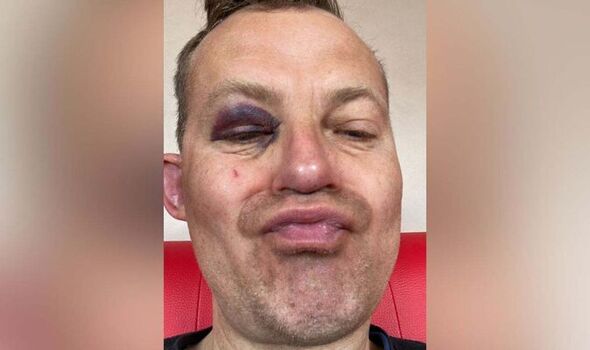 The incident reportedly took place in the early evening on Wednesday, June 8, when a group of teenagers allegedly threw a cup of juice at another customer, before coming over to instigate a fight. The victim told Edingburgh Live he was enjoying a bite to eat in the fast-food chain on Princes Street when the incident occurred.

The 48-year-old said teens were warned by staff on the tannoy system that CCTV was recording and police had been informed of their behaviour, only for them to burst out laughing. A staff member then came up the stairs to confront the group before heading downstairs to call the police but reportedly changed his mind as he thought the situation had cooled down.

Within minutes most other customers left but after more food was hurled at him, the man lost his patience and confronted the anti-social teens himself. The warehouse worker said the commotion kicked off shortly after he entered the restaurant.

He said: “It was last Wednesday just before 7pm, I was sitting in this McDonald’s upstairs when a group of youths came in, just making mess and noise.

“At some point there was like 20 maybe 30 of them, guys and girls, then the staff played a warning over the tannoy that the CCTV was recording and the police were informed.

“So they just burst into laughter and it actually got worse but some of the younger kids left. Then one of the staff, probably the manager, came up and talked with them but then he eventually retreated.

“The group sitting at the big table started throwing food and cups and whatever there was on the table. I think that people sitting there just fled leaving their food and the mob just seized it.”

After trying to enjoy his meal in the West End store but being constantly disturbed, the man decided enough was enough and chose to confront the group.

He explained: “Then as some fluffy stuff landed on my table I got up and fought back with what I had, a half-empty cup of Fanta.

“The big guy produced a water pistol and emptied it and when I stood up and walked towards him he threw it on me and missed. So that’s when all hell broke out.

“He jumped on me so when I lost my glasses, I was trying to retreat but the others were punching me as well, so it was just chaos – I didn’t know what to do.”

After the brawl broke out, the large gang quickly left the store as staff helped the victim with his injuries. He said: “They were gone quickly and left shouting that I was going to get stabbed so I called on 999 and requested police and an ambulance.

“The staff brought me napkins and then the manager came with some sterile wipes and asked what happened.

“While I was still sitting there I could hear an exchange between police and McDonald’s through the tannoys and McDonald’s was saying there was no reason for the police to attend, so I rang them again and after some time they came in.

“They took a statement from someone who saw all of that and took me to the Royal Infirmary.”

Police confirmed they are investigating the incident. A spokesperson told Edinburgh Live: “Around 6.45pm on Wednesday, 8 June, 2022, police were called to a premises on Princes Street, Edinburgh, following a report of an assault.

“A 48-year-old man was taken to hospital for assessment and enquiries are at an early stage.”

A McDonald’s spokesperson said: “The safety and security of our people and customers is our absolute priority, and we have a zero-tolerance approach to violence in the restaurant. The police were called immediately to the incident and we are assisting with any enquiries.”

Liverpool lockdown: Could Liverpool be next city to go on lockdown?