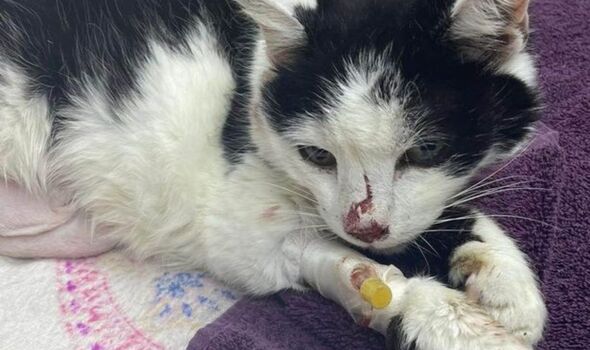 Distressing footage has emerged of a man brutally grabbing a cat before smashing her on the gorund and trying to get his dog to attack it. The owner of the cat, Tracy Heatley, let her 15-year-old cat Lola, out of the house in the evening of December 5 before receiving a distressing call later on.

She received a call saying Lola had been taken to the emergency vets by police with life-threatening injuries.

It was initially thought that the injuries had come from a loose dog attacking Lola, but CCTV footage caught from a neighbour’s house showed it to be a deliberate attack.

Video footage shows the man walking through Laythom Street, Bury, with a dog off its lead, before following Lola into a car park on the corner of Brookshaw Street.

The man was then seen encouraging his dog to find Lola, who was hiding under a van.

The man then grabbed Lola by her back legs before “cartwheeling” her around and throwing her to the floor as she was unconsicious.

Police who approached the man asked him if his dog had attacked Lola, to which he replied “I don’t know”.

When the man failed to keep the dog away, despite being asked to, officers shouted to him “get the dog back bud what are you doing? Your dog’s just attacked that cat”.

The attack has since left mum-of-three Tracy “absolutely heartbroken”, with neighbours who all know Lola as the “community cat” shocked and angered and desperate to find the man responsible.

“I did nothing different to what I do every night and usually she just comes back within minutes, but she wasn’t back by 11pm and I wasn’t going to leave her because it was so cold.

“I went outside and shouted for her but then my house phone rang at about 11:45pm which really worried me as I thought it could be something bad had happened to my two older kids who aren’t at home anymore.

“But it was from the vets who told me how bad her injuries were which was awful. I’ve been on this estate for 20 years and she’s spent her entire life here with no problems, everyone knows and loves her.

“I thought it was a dog at first which feels like an accident but when it was suggested it could have been a person I felt so angry. What sort of person would do that? What’s wrong with you?

“It made sense it had to be a person because the vets kept saying the injuries didn’t add up to it being a dog attack. She’s old and frail so an attack from a dog would have killed her, they said. They called me in three or four times to come in as they didn’t think she’d make it which was so sad

“A neighbour who has a camera looking onto the car park who got in touch saying you could see the full attack. He said to me it’s all horrific and am I sure if I wanted to see it but I needed to. I cried when I saw it.

“It completely broke my heart, and it all made sense. He grabbed her from under the car and cartwheeled her around, smashing her on the ground.

“He takes the dog to her trying to get it to rip her to shreds but it’s not interested. You can then see the police come around the corner and they instantly think it’s the dog by the looks of it.”