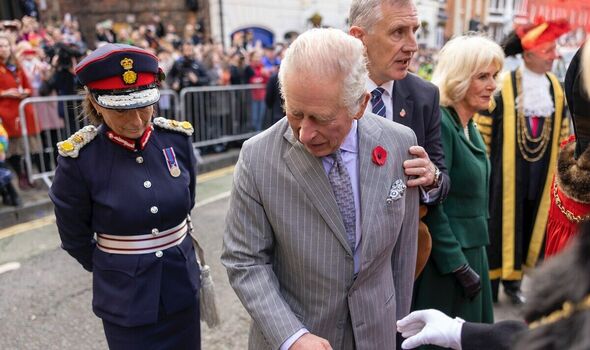 A student has been charged with threatening behaviour after eggs were thrown at the King during a visit to York in November. The Crown Prosecution Service (CPS) has authorised North Yorkshire Police to charge 23-year-old Patrick Thelwell following the incident on November 9. He will appear at York Magistrates’ Court on January 20 charged with threatening behaviour contrary to Section 4 of the Public Order Act 1986.

The King and his wife the Queen Consort had arrived in the city to unveil a statue in honour of the late Queen at York Minster.

But a figure in the crowd then suddenly started throwing eggs, all four of which missed.

Charles, who was meeting and sdhaking the hands of locals, seemed undeterred as the quartet of eggs landed by his feet.

North Yorkshire Police said in a statement: “A 23-year-old man from York has been charged with threatening behaviour contrary to Section 4 of the Public Order Act 1986.

“The charge follows an incident in York on 9 November when eggs were thrown during a visit to York by His Majesty King Charles III.

Nick Price, head of the CPS special crime and counter terrorism division, said North Yorkshire Police had been given the green light to charge Thelwell.

He said: “This follows an investigation by police into an incident in which eggs were thrown at HM The King in York on 9 November, 2022.

“The CPS reminds all concerned that criminal proceedings against Patrick Thelwell are active and that he has the right to a fair trial.”