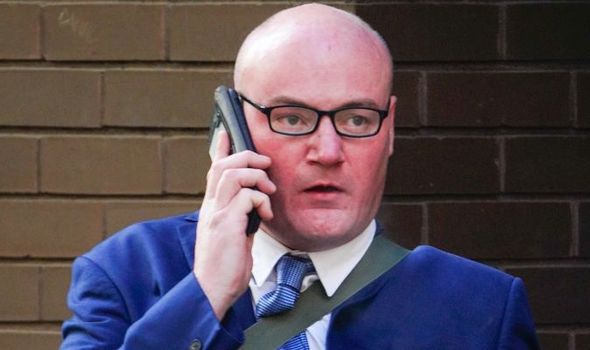 The woman’s teenage son had a “temper tantrum” after seeing VE Day flags and bunting in the house and ripped them down.

Prosecutor Charlotte Rimmer said: “There was an argument between the defendant and the complainant over the phone and he called her son a ‘little c***’ and described his behaviour as disrespectful.

“He returned to the house at around 1pm where the argument continued and he drank four measures of vodka and coke.”

The woman told him she “wouldn’t put up with his behaviour” and asked Morris to leave but he refused.

Ms Rimmer said: “The defendant… then became threatening and abusive towards her.

“They were both inside the kitchen when she picked up her keys and the defendant walked calmly towards her as if he was going to hug her, before pushing with both hands to her shoulders, causing her to fall to the floor.

“The next thing she remembered was being on the floor and feeling his foot striking the back of her head.”

The woman tried to get her son to call the police but Morris headed upstairs.

The boy locked himself in the bathroom to dial 999 but Morris “kicked the door down” before smashing the phone and forcing the teenager to the top of the stairs, the court heard.

The woman was left with a laceration to the back of her head which required eight stitches.

She also suffered bruising and swelling to her face, neck and head.

Her son had bloody finger marks on his upper arm and bruising.

In mitigation, Rachel Shenton said Morris accepted the incident was “wholly unacceptable and unpleasant” and “should never have happened”.

She said: “This was a perfect storm in many ways. This was out of character – he is not somebody who hits women or children.”

Sentencing Morris, Recorder Carwyn Cox said: “On that evening you were out of control.

“You lost sense, which I believe you usually have. This was wholly out of character and a one-off.”

He was ordered to complete 30 days of rehabilitation activity and undertake 200 hours of unpaid work.

A restraining order also bans Morris from contacting the woman or her son.

Morris has one previous conviction for assault dating back to 2001.

Harry’s hopes of ‘creating impact’ at BetterUp challenged: ‘What about average worker?’