A man was threatened with arrest and forced into a police car after refusing to give an officer his name as he travelled to work during the third national lockdown.

The cop refused to social distance as he called the man an ‘idiot’ and told him ‘you’re going to get locked up’ during the incident in Solihull, West Midlands, on Wednesday.

A formal complaint has been submitted to West Midlands Police and an investigation has been launched.

Anyone stopped by the police does not have to give their name and address, unless the officer points out an offence they reasonably suspect the person to have committed.

A video taken outside a train station shows the man be summoned over by a male officer in a police car who asks ‘what you up to?’

After he says he lives nearby and is on his way to work, the officer asks his name.

He tells them ‘don’t worry about that’ but the cop insists he needs to know in order to ‘enforce legislation’.

The man tells the officer he doesn’t need to know who he is as he ‘hasn’t committed an offence’. 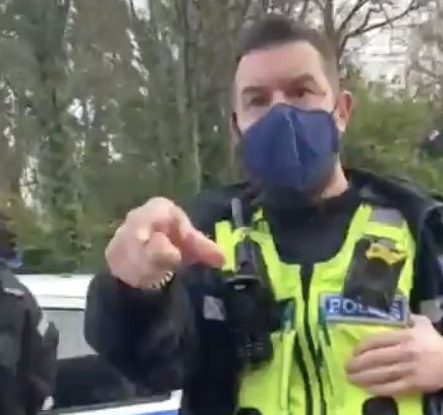 When the cop questions if he definitely lives in the area, the man points out that he doesn’t know if any of the people at the train station live nearby.

The officer replies: ‘Well, that’s my job isn’t it? At the moment I’m interested in you.’

When the man asks if the police officer wants to turn on his body cam, he is warned: ‘We’ll be dealing with this in a different manner now’.

Stepping out of the car, the policeman puts on a mask and approaches the man. He tells him: ‘Under coronavirus legalisation, you have to provide me with some details otherwise you’re going to be arrested.’

In light of social distancing guidelines, the man warns him he is getting too close, saying ‘back up’.

The policeman disagrees as the man is ‘not giving his details’, adding: ’You’re going to get locked up in a bit mate’.

As things become heated the cop accuses the man of lying, saying: ‘I don’t know you live round here. You’re arguing with me, that gives me reasonable suspicion that you’re telling me lies.’

He adds: ‘We’re the police, we’re not just someone, you idiot.’

He appears to grab the man’s wrist and pull him in the police car, saying: ‘Sit in there, we’ll see what you’ll say at the station then. You’re going to be late for work.’

A second video appears to show a struggle in the vehicle as the officer demands the man put on his seatbelt.

West Midlands Police has confirmed the man involved in the incident was not arrested.

Under coronavirus laws, a police officer can carry out an arrest if they have reasonable grounds to suspect a person has committed an offence.

However, they should encourage individuals to go home before attempting other methods of enforcement.

It comes as police across the country crackdown on Covid rule breakers, with Home Secretary Priti Patel saying there is a ‘need for strong enforcement’.

Earlier in January, two women were fined a total of £400 for driving five miles to go for a walk but were told they will not have to pay the penalties after a police review.

Solihull Police Commander, Chief Superintendent Ian Parnell told Metro.co.uk: ‘We are reviewing body-worn video of an incident in Solihull yesterday involving two of our officers, after footage was released on social media.

‘We have subsequently received a complaint and this will be investigated by our Professional Standards Department.

‘We expect the highest standards of professionalism from our officers and will take action if those standards are found to fall below that level. We will be keeping the complainant fully updated.’

Ex-Tory Antoinette Sandbach grilled by Hartley-Brewer – ’Did you lie to constituents?’