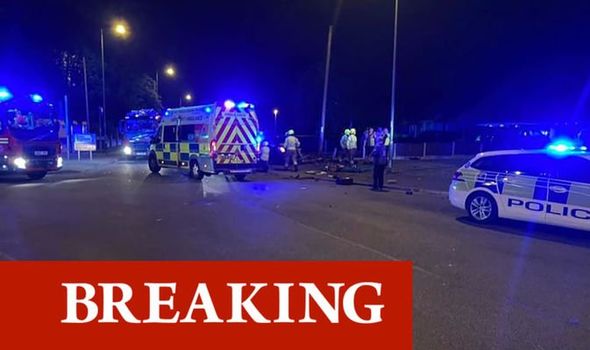 Two vehicles collided at a busy junction in the Pelsall area of Walsall, West Midlands, just before midnight on Wednesday. One man was confirmed dead at the roadside when paramedics arrived.

Four other patients were dashed to hospital, two of whom are in serious conditions.

“We were called at 11:54pm to reports of collision involving two cars at the junction of Norton Road and Wolverhampton Road. We sent five ambulances, two paramedic officers, a MERIT trauma doctor and a HART paramedic to the scene.

“On arrival, crews found five patients from the two cars. One of whom, a man, was found to have suffered serious injuries in the incident. He received specialist trauma care but unfortunately, despite the best efforts of ambulance staff, nothing could be done to save him and he was confirmed dead at the scene.

“The second patient, a man, had suffered serious injuries, he was assessed and given trauma care on scene and was conveyed to Queen Elizabeth Hospital Birmingham by land ambulance, on blue lights and sirens.

“A third man was treated for potentially serious injuries whilst two more were treated for injuries not believed to be serious. All three were transported to Walsall Manor Hospital for further treatment.”

Further details of the patients, including ages, are yet to be released by the authorities.

The crash happened in the suburb on Norton Road at the junction of Wolverhampton Road, both of which were closed for hours.

Norton Road connects Walsall with Little Wyrley and Norton Canes in Staffordshire in the north.

Royal rift: Princess Diana had a ‘stronger connection’ with Harry than Prince William