A man narrowly escaped being crushed by a falling four-foot boulder when a phone call from his girlfriend saved him.

Mauricio Henao was sat in his parked Honda when the huge boulder started to slide down a mountain, days after terrible storms hit Malibu.

Moments before it fell, his partner called to ask him to grab something from inside his house.

Once he was indoors, ‘loud crashes’ rung through the 20000 block of Pacific Coast Highway, as the boulder slammed into the vehicle just above the windshield.

The ‘traumatised’ driver ran outside to find his car crushed, with the windshields broken and the frame of the car twisted.

Mauricio told ABC 7 he feels lucky to be alive, saying: ‘I feel like I should play the Lotto.’

The smiling driver snapped a selfie with his destroyed vehicle, showing the boulder still sitting in the front seat. 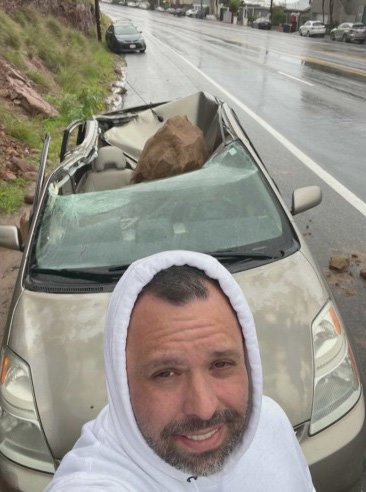 But he added: ‘I’m pretty shook up. Honestly, I don’t think I’ll park here again after this. I’m a little traumatised by this whole ordeal.’

Describing his lucky save, he said: ‘My girlfriend called me and said, “Hey, can you get my bag that I left there” so I went back inside and I heard rumbling outside.’

Mud, rocks, and boulders, spread across four lanes of traffic on the roadway on Tuesday.

Fortunately, no one was hurt by falling rocks, although many other cars were damaged.

Nick Kennedy, another local whose SUV was damaged while parked in his driveway, said: ‘I’m kind of glad my car was there. I don’t know if [the rocks] would have gone through the wall of the house and nailed me because my desk is right on the other side of that wall.’

The terrifying rockslide came after massive storms hit Southern California over the past few weeks.

At least 19 people have been left dead across the state after areas were left flooded and trees and rocks fell.