A barrister who held up a blank piece of paper near the Houses of Parliament was told he risked being arrested if he wrote ‘not my King’ on it.

Paul Powlesland, 36, said he travelled into the capital on Monday because he was concerned at reports of police targeting protesters exercising their rights to ‘freedom of speech’.

The detention of anti-monarchy demonstrators after the Queen’s death has been called ‘deeply concerning’ and an ‘affront to democracy’ by campaigners.

At least three arrests have been made on suspicion of breach of the peace and public order offences since King Charles’ proclamation, including a heckler who branded Prince Andrew a ‘sick old man’.

Mr Powlesland recorded part of his interaction with the police officer in Westminster and shared it on social media.

‘Why would you ask for my details?’ he can be heard asking the officer, who said ‘I wanted to make sure you didn’t have bail conditions.’

He added: ‘You said you were going to write stuff on it, that may offend people, around the King. It may offend someone. 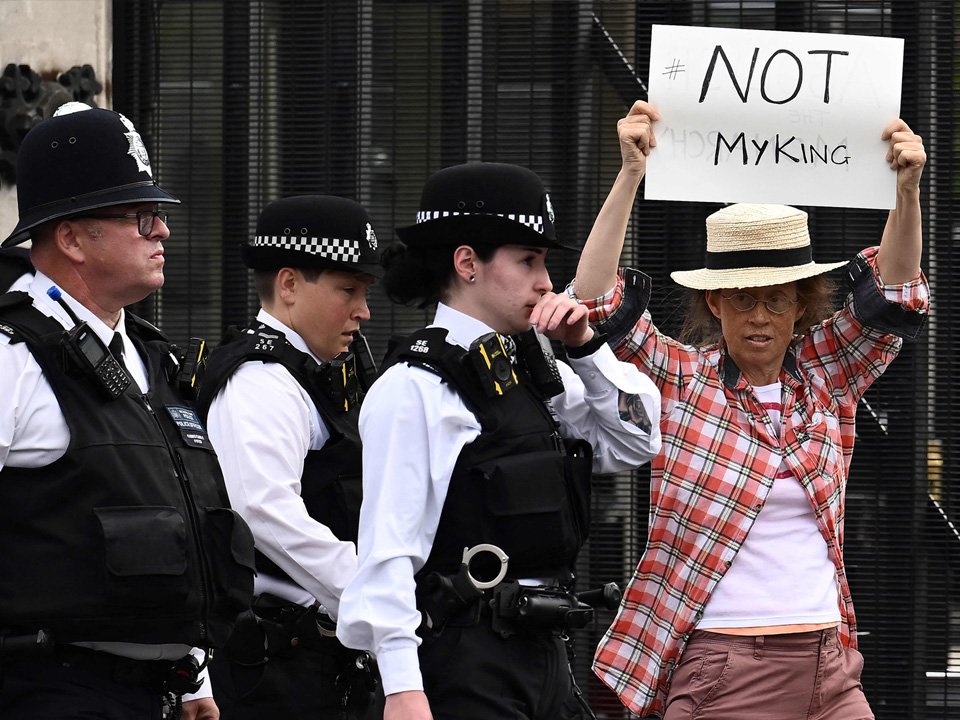 ‘I don’t know, someone may be offended by it,’ the cop replied.

The Met’s Deputy Assistant Commissioner Stuart Cundy said they were aware of the footage and insisted people ‘absolutely have a right to protest’.

He added: ‘We have been making this clear to all officers involved in the extraordinary policing operation currently in place and we will continue to do so.

‘However, the overwhelming majority of interactions between officers and the public at this time have been positive as people have come to the Capital to mourn the loss of Her Late Majesty the Queen.’

Explaining why he went down to protest, Mr Powlesland said: ‘I actually couldn’t risk arrest as I’m due to be in tribunal. So I just thought I’d take a blank piece of paper down there.

‘Partly, as a comment as well on the lack of freedom of speech and how ridiculous it is. So I held that up and various police officers spoke to me and I tried to find out from some of them, whether if I wrote, “not my King” on it, they would arrest me.

‘They didn’t know or wouldn’t say, and then I went for a little walk around and went down towards Downing Street.

‘And then that officer came up to me and began that conversation effectively asking for my details and then saying, if you write “not my King” on it, then we may well arrest you for public order offences, being offensive.’

Mr Powlesland was not arrested but said the interaction only strengthened his feelings.

‘It feels like a very odd time, when there does seem to be… using the respect that is due to the Queen and her death, as a way of silencing any dissent over Charles’s accession,’ he said.

He added: ‘I’m not actually a republican, or I wasn’t before this week. Like most British people, I was vaguely ambivalent to the monarchy. But this week, and what’s been happening, has made me republican.’