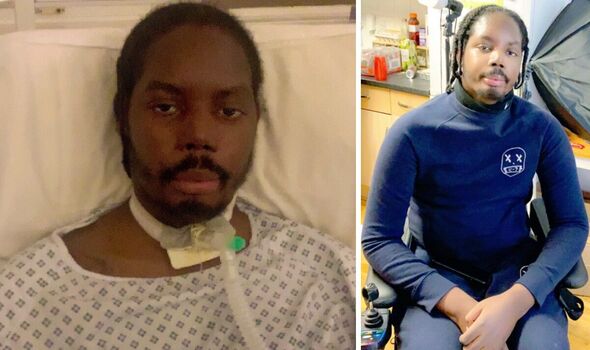 A 30-year-old man has been “trapped” in an NHS hospital for 9 months despite being medically discharged. Junior Jimoh, who has a neurological condition that stops him walking, said he “is being punished” as he remains in a London hospital because of a lack of available community care that would allow him to safely return home. He has been in St Thomas’ Hospital in London since May 2022 after getting sepsis.

Mr Jimoh has been ready to go home since September but has been prevented from doing so because there is no “nurse-led care package” for him, he told Sky News.

He needs a ventilator to breathe and constant specialist care.

Mr Jimoh said: “In my mind, it’s frustrating, and I feel like everybody doesn’t care anyway.

“Everyday consultants and medical teams say the same thing, that I need a nurse-led care package. I feel like I’m being punished.”

His mother, Morile Salami visits him every day but has said the stress of her son’s peril and the uncertainty keeps her up at night.

She said her son will be “better” away from hospital but only with the right services available.

Sky News reportedly saw a report from London Ambulance Service showing that the man was at risk of being neglected – which could have ultimately killed him.

The board in charge of his care told the publication it considers an individual’s needs and circumstances into consultation with the patient and their carers.

Nearly 12,000 patients across the UK spent Christmas Day in hospital even though they were fit enough to be discharged.

The locked in patients have contributed to the NHS’ shocking wait times and other issues.

The Government recently announced it would be pouring up to £250million into the NHS to speed up hospital discharge.

He explained £200million would “help more people get safely discharged from hospital” and the other £50million would “expand hospital discharge lounges and ambulance hubs”.

But the announcement was bashed by health professionals who suggested the funds would only scratch the surface of issues within the NHS.

Matthew Taylor, chief executive of the NHS Confederation said: “It is widely acknowledged that many of the seeds of today’s crisis were sown during the decade of austerity and it is only six months since we had a Prime Minister boasting of building forty new hospitals and claiming social care was ‘sorted’ so it is good to see No10 taking responsibility.

“But the reality is that holding a Downing Street summit about a crisis in the midst of that same crisis shows the government is playing catch up.”

“NHS leaders, collaborating with local authority and voluntary sector partners, have been working innovatively to manage demand, create extra capacity and use it as intensively as possible, but there are no silver bullets and there is now only limited improvement that can be achieved this winter.

“The reality is that there is a widening gap between the NHS’ capacity and the demand it is facing, and this has left the NHS in a fragile state.”