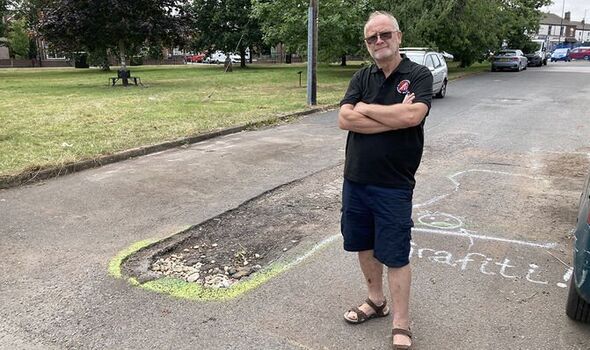 Derek Woodacer, 65, is fed up with families using his road to drop their children to school and collect them. He believes this use has caused huge potholes to develop on the street in Tyldesley, Greater Manchester.

But, as the road is private, it is not the council’s responsibility to repair it.

The grandfather of three had previously built a barricade on the road using metal road plates but, after a neighbour complained, he had to remove them.

Now Derek, who has lived on the street for five years, intends to install a replica of a lake in front of his house in a bid to deter “unauthorised” road users.

Speaking to Express.co.uk today, the dad of two said: “I have thought about it. I have decided I want something flexible and so I will put plants in plant pots, and put plant pots on wheels and create a lake.

“It will make it interesting and stop unauthorised road users. It will be a couple of inches deep with railings on each side and I’ll have to top the water up with watering cans every now and then.

“It will be like a lake and the idea is to keep the profile of the situation high and make it amusing as well.” 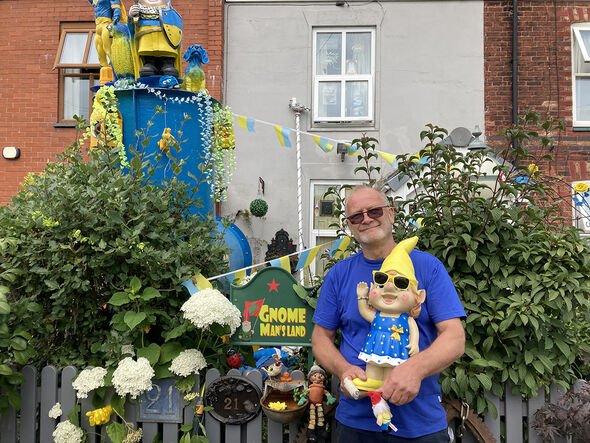 “This is an unadopted road so the council is not responsible for it,” Derek added.

“When I moved in I thought ‘what the hell is this’.

“The first week I saw a lot of people parking from the school. I felt a lot of abuse from parents when I told them they couldn’t park there.

“We have to pay to repair the road and it costs thousands. I met every resident on the road and they told me about all the problems.

“There have been assaults and property damage and we wanted to get this sorted. This was in terms of trying to stop people parking here.”

When Derek removed his metal blockade, he says the potholes became deeper. He alleges this has been caused by parents and also visitors to a nearby pub who also park on the street.

The homeowner added: “Parents of children at the school have caused most of the wear and tear in my opinion, and people visiting the pub as parking is limited there.

“There are only a few residents who use cars on the road. The wear caused by residents is minimal in comparison to the parents at the school.”

Derek has also bought a smartphone-controlled parking barrier he intends to install on his section of the road to ensure only residents park along it.

He said: “It is an incredible machine that you can open with an app and a special code. It means anyone who needs to access the road can do so, and it will stop illegitimate access.”

But Ruby Howard, who has lived on the street all her life, believes that Derek’s passion has led him to go too far. She explained that his shenanigans in the early hours have given people sleepless nights.

“Originally our road is unadopted and we own up to halfway on the road to the middle of the street and we have the school at the end,” the 24-year-old said. “For 16 years we have always had a back and forth [with the school].

“We all paid for it to be resurfaced, the parents driving up and down and he took it upon himself to put barriers in. That has led to abuse arguments with parents. It looked awful.

“I contacted the council and have been trying to get it removed for two-and-a-half years. It got to the point where emergency vehicles and bin men couldn’t get through.

“It has been stressful, people on the street have sleepless nights. At first he was alright and wanted to help with the road, I think he got a bit too passionate.”

Prince Harry in ‘Catch-22 situation’ between Meghan and family