For the first time in the history of court proceedings in England, cameras have been allowed to film proceedings.

Ben Oliver was sentenced this morning following the death of his grandfather David Oliver.

The 25-year-old from Bexleyheath, south London, admitted the manslaughter of Mr Oliver, 74, on January 19 last year.

Cameras filmed the moment Judge Sarah Munro passed down a life sentence, with a minimum of ten years, on Ben Oliver.

The 25-year-old stabbed his grandfather to ‘protect’ his nan following a decline in his mental health following the covid pandemic.

Judge Munro told the Old Bailey David Oliver was stabbed in the mouth and eyes so he could not ‘cry out’ or ‘look into his eyes’ as the assault took place.

She said the killing was ‘ferocious but controlled’.

She told Ben Oliver: ‘You were making conscious decisions to attack his eyes and mouth, knowing you were killing him and why you did so.’

The 25-year-old had a traumatic childhood and was badly bullied at school, the Old Bailey had heard.

Judge Munro said the defendant had been convicted of sexual offences against a young girl when he was aged 15. 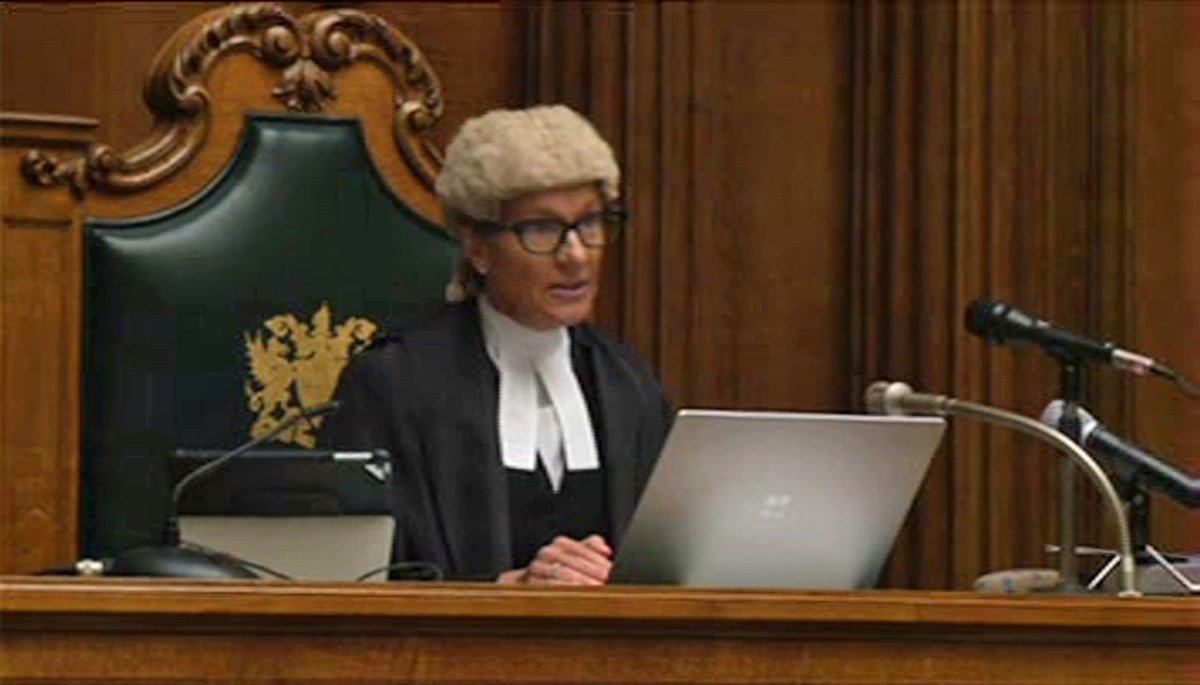 The footage from his sentencing was broadcast across various news outlets in a legal first for England.

High profile sentencing, such as in today’s case, will continue to be filmed as the nature of court reporting shifts.

The move to allow cameras in crown courts follows a change in the law in 2020, but its implementation was delayed due to the pandemic.

News outlets – such as Sky, the BBC, ITN and PA – have campaigned for years to allow for cameras to film crucial moments in court proceedings.

Jury members, witnesses and others in the courtroom will not be filmed under the new arrangements.

Cameras will solely record final verdicts and dramatic statements from judges as they address the dock.

Previously, there had been fears that broadcasting footage from within courts could put witnesses off sharing statements.

In 1995, OJ Simpson’s trial for the murder of his ex-wife Nicole Brown Simpson and her friend Ron Goldman was broadcast across America.

It was condemned for ‘providing an unedifying spectacle’ and branded a ‘media circus’.

In Scotland, cameras have been allowed within court rooms under various conditions since 1992.

David Gilroy, found guilty of killing Suzanne Pilley in 2010, had his sentencing broadcast on STV in a legal first two years later.

The broadcaster had successfully applied for the chance to film in Edinburgh’s High Court to offer viewers a ‘rare insight’ into the operations within a court room.

Extending such a practice in England and Wales will help people understand ‘complex decisions’ according to justice secretary Dominic Raab.

He said: ‘Opening up the courtroom to cameras to film the sentencing of some the country’s most serious offenders will improve transparency and reinforce confidence in the justice system.

‘The public will now be able to see justice handed down, helping them understand better the complex decisions judges make.’

The Lord Chief Justice of England and Wales, Lord Burnett of Maldon, added the move was ‘very positive’ in promoting open justice.

He said: ‘I think it’s an exciting development because it will help the public to understand how and why criminals get the sentences that they do in these very high-profile cases.’

Broadcasters hailed cameras in crown courts as a ‘landmark moment for open justice’ and a ‘victory for the viewer’.

There will be a ten-second delay to broadcasts to avoid the breach of reporting restrictions or other errors.

The Central Criminal Court in London routinely hears some of the most complex cases, including murders and terrorism trials.

The sentencing of Oliver took place from 10am in Court Two, one of the Old Bailey’s oldest courtrooms.

Oliver was said to have Autistic Spectrum Disorder which, combined with other emotional and mental factors, diminished his responsibility for the killing.

On the morning of the incident, the 25-year-old was said to have suddenly picked up a kitchen knife, walked into his granddad’s bedroom and ‘brutally’ knifed him several times in the head.

Prosecutor Louis Mably QC told jurors: ‘He was attacked and killed as he lay helpless in bed, in his bedroom on the first floor of the house.

‘He had been repeatedly stabbed and slashed with a knife in the face, and in particular in the neck, which had effectively been cut open.

‘It was a brutal attack, plainly carried out with the intention of killing him.’

Jurors at the Old Bailey were told he had become ‘very angry’ after finding out a few months earlier that his granddad had been accused of historic sexual abuse of girls.