A 25-year-old man was arrested on suspicion of attempted murder after the attack, which happened shortly before 9pm.

Two knives were recovered at the scene and a property is being searched in the Cheetham Hill area.

In a briefing on Tuesday morning, police said they were keeping an open mind about the motive.

They have not yet confirmed whether the suspect is a British national.

The three victims were taken to a nearby hospital in a “serious” condition but their injuries are not thought to be life-threatening.

A woman in her 50s suffered injuries to her face and stomach, while a man – also in his 50s – has injuries to his stomach. 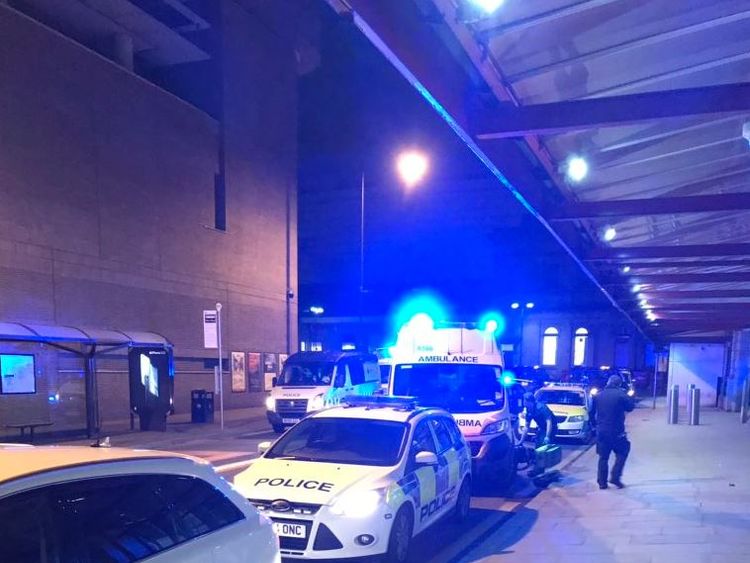 They are still being treated in hospital.

A British Transport Police (BTP) sergeant in his 30s was also treated after he was stabbed in the shoulder, but has since been released.

Prime minister Theresa May tweeted on Tuesday: “My thoughts are with those who were injured in the suspected terrorist attack in Manchester last night. I thank the emergency services for their courageous response.”

Sam Clack, a BBC producer who works in the city, was on a platform at Manchester Victoria when he witnessed the attack.

He said: “I just heard this most blood curdling scream and looked down the platform.

“What it looked like was a guy in his 60s with a woman of similar age and another guy all dressed in black.

“It looked like they were having a fight, but she was screaming in this blood curdling way. I saw police in high-viz come towards him. He came towards me.

“I looked down and saw he had a kitchen knife with a black handle with a good, 12-inch blade. It was just fear, pure fear.”

Mr Clack said police officers used a Taser and pepper spray before “six or seven” of them jumped on the man.

A New Year’s fireworks display in the city’s Albert Square went ahead with “increased security”.

Ian Hopkins, the chief constable of Great Manchester Police, called the incident a “horrific attack on people simply out to enjoy the New Year’s Eve celebrations”.

He said British Transport Police officers had showed “incredible bravery” in tackling and detaining the suspect – who remains in custody in Manchester.

“We’re currently searching an address in the Cheetham Hill area of Manchester, where it’s believed the man has most recently been living,” added Chief Constable Hopkins.

:: Anyone with pictures or video of the incident is asked to send it to [email protected] Anyone with information can call 0161 8563400.

Tory government will hold confidence vote in itself – but not Boris

Kate Middleton: Queen knows the monarchy ‘is in good hands’ with the Duchess of Cambridge