The excruciating interview with the former European Commissioner for Trade took place on BBC’s Today programme this morning. Lord Mandelson pushed to allow “a compromise to emerge from this process which is then put to the test of public opinion.” He added: “And when the public signs off when the public gives their consent to this compromise, that will end the argument.

“Because they will say to everyone else you have to live with this, that’s an end, this is closure.”

But BBC host Martha Kearney replied: “I want you to listen to something now because these promises were made before, weren’t they?

“That this was going to be a decision only taken once. And this was you yourself speaking during the referendum.”

Ms Kearney then played a clip from a speech Lord Mandelson had given at Manchester Metropolitan University three years ago during the referendum campaign. 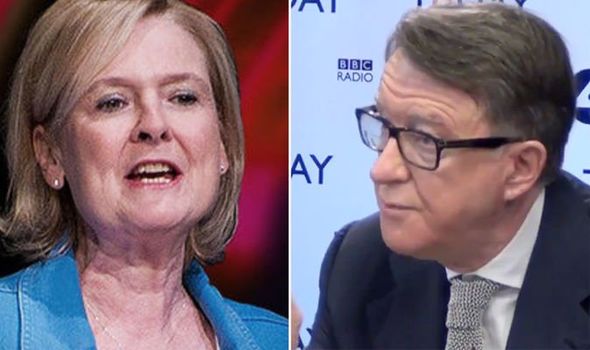 The Labour peer had said: “It’s so important this decision.

“It’s not like a general election where you can put your vote on one colour and then three or four years later just boot that team out and change direction.

“It’s not like that. This is a decision – a once and for all decision.

“We will not be taking a decision like this again in our lifetime.

“And that’s why it’s got to be the right decision and the right choice for the country.”

When the clip had been played, Lord Mandelson commented: “And that I think defines the whole problem. The problem is in 2016 the public never voted for a specific proposition, a specific form of Brexit.”

But Ms Kearney snapped back: “But you said in that interview that it was going to be a once in a lifetime decision and people may have believed that.”

The former MP for Hartlepool insisted: “It is a once in a lifetime decision to stay in or leave the EU but at no stage during that referendum was a specific form of Brexit… people were not asked to embrace either a very painful hard Brexit or, frankly, a Hotel California Brexit in which case we check out of the EU but never leave.”

Ms Kearney fiercely shot back: “If you talk to people who voted to leave they said they knew perfectly well what they were voting for and it’s patronising to suggest otherwise.”

One wrote: “I voted Remain but this constant suggestion Leavers didn’t know what they voted for is patronising, mendacious and wrong and therefore typical of the entirely negatively contribution made by Lord Mandelson to British politics.”

Another said: “Lordy Mandelson on The Today Programme talking Tommyrot, again! How does that former EU Commissioner, with his biased view, get airtime? He even rubbished his own arguments when a recording of his own rhetoric was played back to him.”

Another user blasted: “Shilling for the so-called People’s Vote campaign on @BBCr4today, Peter Mandelson has his pre-Referendum words that it was a one-off final binding vote actually played to him. Shrugs it off lightly. The man is shameless.”

The interview comes as parliament prepares for a second round of indicative votes today after all eight put forward failed last Wednesday.

'Informers will be executed': chilling graffiti painted near spot where Lyra was killed