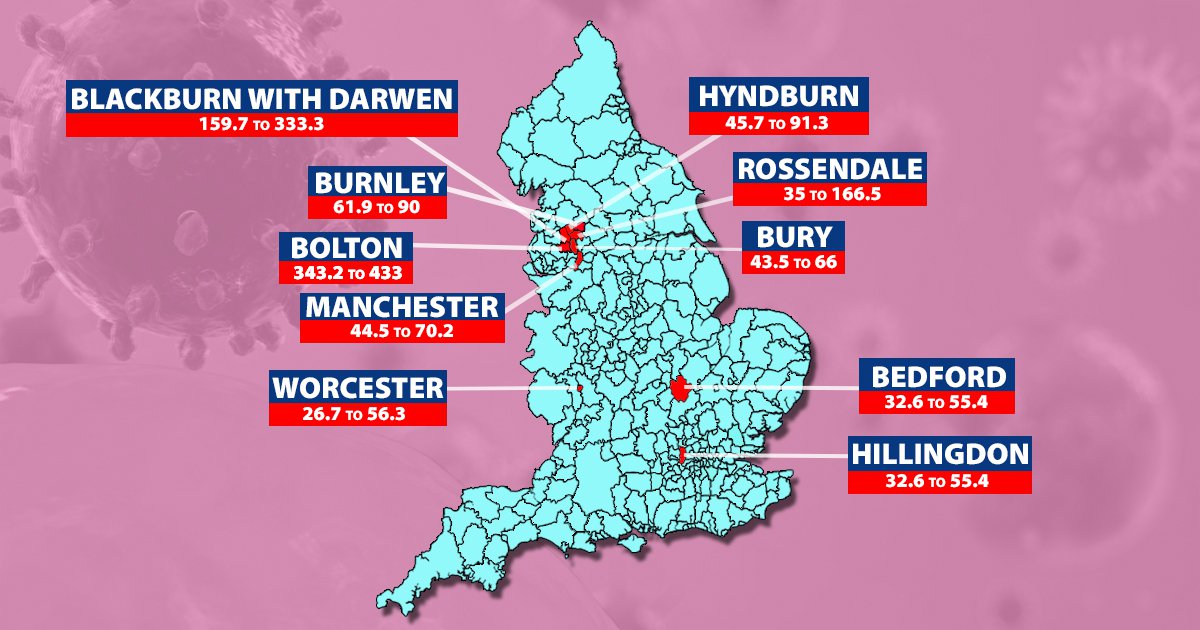 Covid cases are now rising in more than half of England, with the new Indian variant of the disease becoming dominant across the country.

The latest figures show a third wave of infections is slowly beginning to take hold, driven by the highly infectious strain that has run rampant throughout India.

NHS bosses are watching nervously to see whether the UK’s world-leading vaccine drive can stand up to the increase in infections, which would make this wave far less severe.

Cases have topped 3,000 for the last two days, the first time this has happened since early April, and hospital admissions are now also creeping up again after falling for months.

The latest developments have cast doubt on whether the so-called Freedom Day on June 21, when all restrictions are set to end, can go ahead as planned.

Bolton in Greater Manchester continues to have the highest rate and cases are still rising compared to the previous week.

But health secretary Matt Hancock has said there were ‘early signs’ that coronavirus rates in the hotspot were starting to ‘cap out’, sparking hope that efforts to surge test and vaccinate were having an impact.

He added that of the 49 people in hospital with coronavirus in Bolton, only five have had both doses of vaccine.

Experts are increasingly worried about the spread of the Indian variant after cases again doubled in a week. Three-quarters of all new infections are now the Indian mutation.

Cases however remained constrained to certain hotspots, while rates are still flat in much of the rest of England.

Badly affected areas include Blackburn with Darwen, which saw the biggest week-on-week rise, as well as Rossendale, Bedford and Hyndburn.

Areas with the highest Covid rates this week

In contrast there were no new cases at all in Eden in the Lake District and Ryedale in north Yorkshire.

Despite the differences between localities, the Government is so far resisting calls to introduce local measures again.

Kelly O’Neill, the director of public health for hard-hit Hounslow in London, has insisted that the possibility of a localised lockdown is still ‘a long way away’.

Ms O’Neill said the council had been managing outbreaks by taking a case-by-case approach and persuading people who test positive to self-isolate.

She told BBC Breakfast: ‘I think that any suggestion of lockdown is is a long way away, it will damage us economically and socially, and actually it would end up with us losing confidence with our communities, and we’re nowhere near that.’

She said that in some minority communities in the area, as many as one in five people eligible for a vaccine have not come forward, but that this was starting to change.

Some 1,300 people have had the vaccine at a centre set up at a Sikh temple on Thursday, Ms O’Neil told the programme.