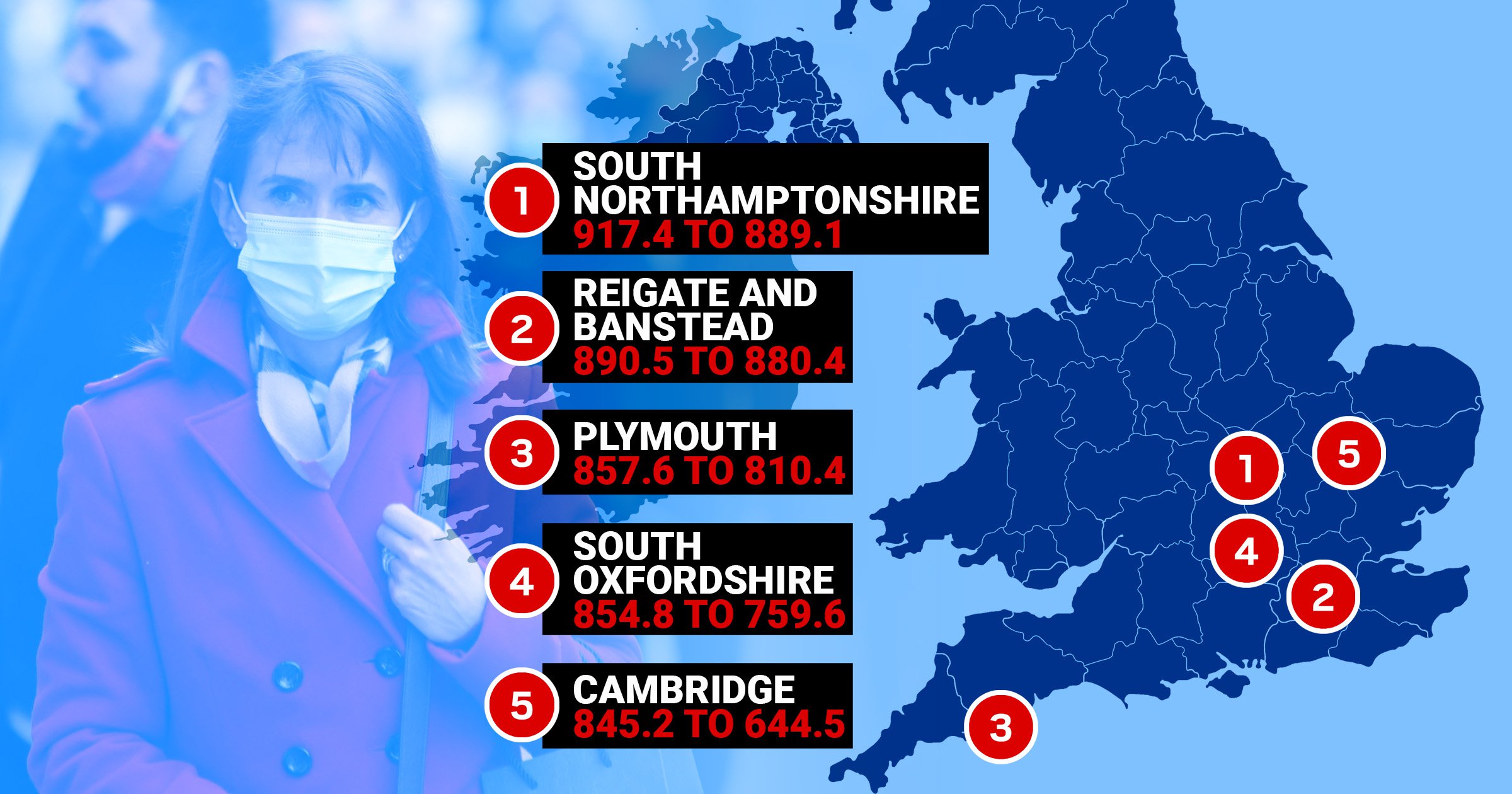 An Omicron hotspot has the highest number of Covid cases in the UK overall, according to the latest data.

South Northamptonshire was one of the first places to be hit by the new variant and now has a case rate of 917 per 100,000.

London, where Omicron is now dominant, was home to the top five areas where cases are rising week-on-week.

Southwark, Lambeth, Hackney, Islington and Lewisham all saw infections soar between December 4 and 11.

Data from the Government’s coronavirus dashboard shows of the 377 local authority areas in the UK, 226 (60%) have seen a week-on-week rise in rates.

This however only covers cases up to December 11 as the data for the most recent days is incomplete and does not reflect the true number of cases.

It means the almost 79,000 cases announced yesterday – a record for the whole of the pandemic – are not included.

Top ten areas with the highest Covid rates in UK

Mr Whitty said more records will be broken in the coming days and it is highly likely cases will be on the rise everywhere soon.

In South Northamptonshire, 26 cases of Omicron were recorded up to December 4, which at the time was the highest in England.

Since then the variant has spread at a rapid rate but the county’s public health director Lucy Wightman told the BBC cases have so far been consigned to a ‘relatively young age range.’

Reigate and Banstead in Surrey, Plymouth in Devon, South Oxfordshire and Cambridge make up the rest of the top five places where Covid rates are highest.

The five UK areas with the biggest week-on-week rises

The director of Public Health for Devon County Council, Steven Brown, has predicted that Omicron will hit Plymouth just as cases were beginning to fall.

He said: ‘The last seven to eight days or so, we’re starting to see a bit of a downward trajectory in that, so numbers are coming down in Devon, however, I would urge a bit of caution.

‘We do know that the Omicron variant is much more transmissible than Delta so I fully expect that as we run into Christmas we’ll see those case numbers start to rise again.’

Latest data has suggested that about a quarter of all cases are now Omicron – meaning that around 20,000 of Wednesday’s reported 79,000 cases may have been caused by the new variant.

Speaking in Downing Street yesterday, Mr Whitty said: ‘An increasing percentage of all of our cases is now Omicron but that’s not because Delta is going away, it’s because Omicron is being built on top of that.’

He showed a slide which showed Omicron is on the rise across the whole of the UK, but most sharply in London.

He said from Christmas onwards he expects to see most cases going into hospital in London will be caused by Omicron.