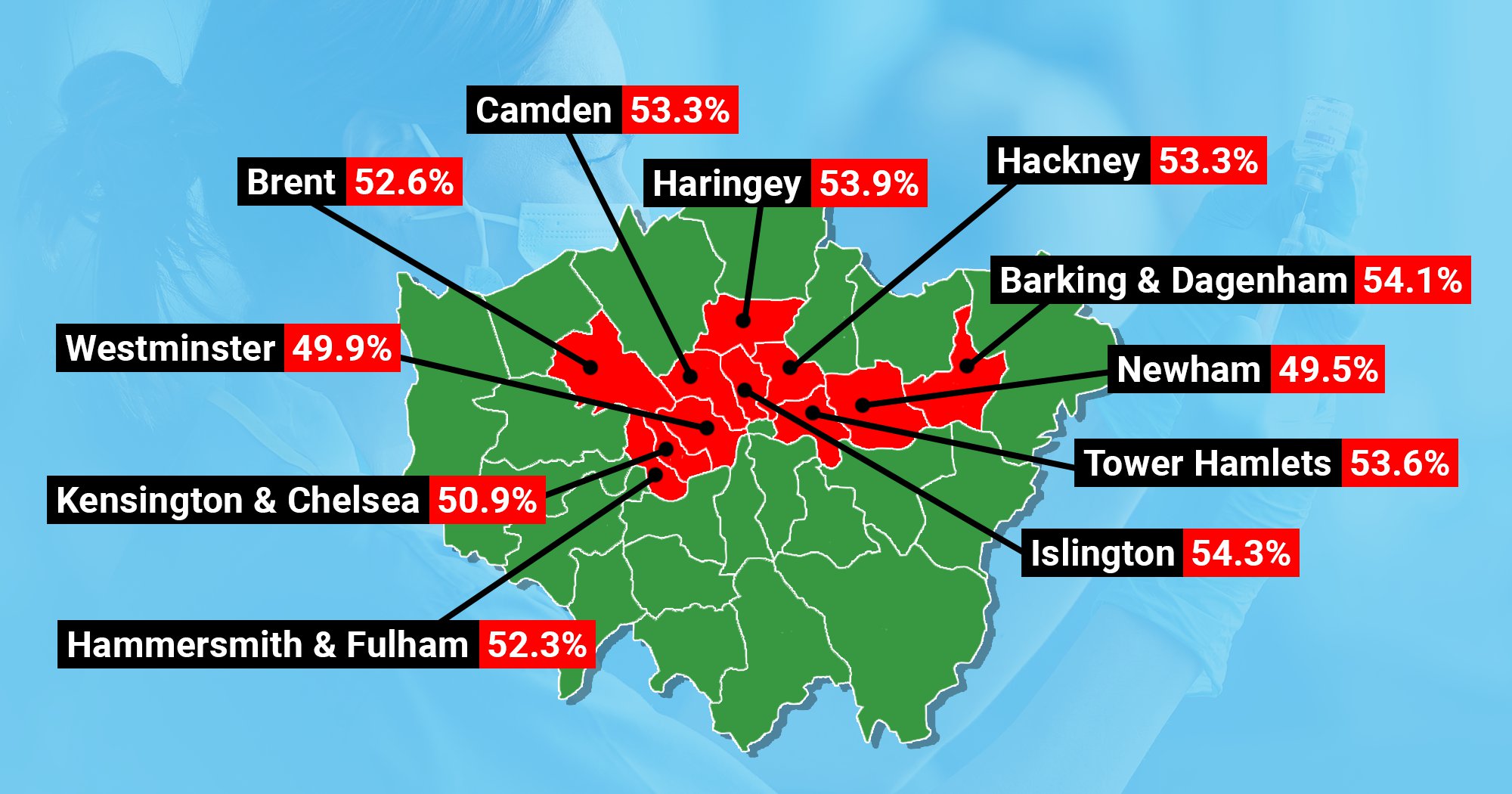 With winter looming and fears of a new wave growing, central London is the least vaccinated place in England.

All 11 of the areas with the lowest vaccine coverage are in the capital and border one another.

As ministers in Whitehall plot how to navigate the country through a possible fourth wave, the city outside their windows is heading into the colder months as the least vaccinated place in the country.

Heath officials have acknowledged uptake in London has slowed, with little change in the vaccination rates this week.

Another 36,000 infections have been confirmed today and hospitalisations and deaths are on the rise before autumn has even properly arrived.

Public Health England data shows Newham in East London is the local authority with the lowest proportion of double-jabbed people (49.5%).

Along with Westminster (49.9%), it is one of just two local authority areas in England where a majority of people still haven’t had two doses.

Across the UK as a whole, 80.4% of people are fully protected but much of the capital is lagging well behind.

London’s lagging behind on Covid-19 vaccinations

All eleven of the English areas with low vaccine uptake are clustered together in the capital.

Kensington and Chelsea, Hammeramith and Fulham and Brent make up the rest of the bottom five.

London’s unwelcome record of unvaccinated areas is only disrupted once you reach number 12 on the list (Manchester at 55.6%).

The most vaccinated area in the capital is Bromley at 74.1% but it still sits in the bottom half of local authorities ranked by vaccine coverage.

A number of factors are believed to be behind London’s poor vaccine uptake rates.

The city’s population is younger and more diverse, two factors which drive up vaccine hesitancy.

But epidemiologists also point to the fact it’s difficult to get a handle on how many people are actually living in London now.

It’s unclear how many foreign workers left the country post-Brexit and how many people who used to work in London offices and businesses are living elsewhere.

While a data discrepancy could influence the final percentages, professor Kevin Fenton, London’s regional director for PHE, accepted there is an uptake problem.

He praised the ‘incredible’ work of vaccinators but added: ‘Despite these huge strides, the number of people coming forward has unfortunately slowed and our overall coverage is lower than we would like to see.

‘Unless more people get vaccinated, we could face serious problems as we move into autumn and winter, when respiratory viruses are more prevalent.’

Prof Fenton added ‘confidence in the safety of the vaccines has never been higher’ and pointed to unequivocal safety data, including for pregnant women.

He called on more people to come forward to ‘protect ourselves and our loved ones from falling unwell’.

Christina Pagel, a University College London professor who has gained a large Twitter following with her Covid-19 analysis, said the mutation of the virus had changed the picture and urged Londoners to ‘get vaccinated as soon as possible’.

She said: ‘With Delta being so transmissible we can’t rely on current levels of population immunity to either get cases down or protect the unvaccinated from infection.’

London mayor Sadiq Khan is monitoring the situation closely and is also urging people in the city to reverse its low vaccination reputation.

A spokesperson said: ‘It is a huge achievement that more than 11.6m doses of the vaccine have been given in London, and every day we are seeing the huge difference that it is making in our fight against the virus.

‘We know that London has a younger, more mobile and diverse population, with a higher proportion of people who are not registered with a GP, but the mayor has been working closely with the NHS and local councils to reach every Londoner and improve access.’

The findings comes as the MHRA approves two vaccines to be used as a booster shot, paving the way for an autumn third dose drive.

Princess Anne snub: Why Queen’s daughter was accused of ‘not liking people’