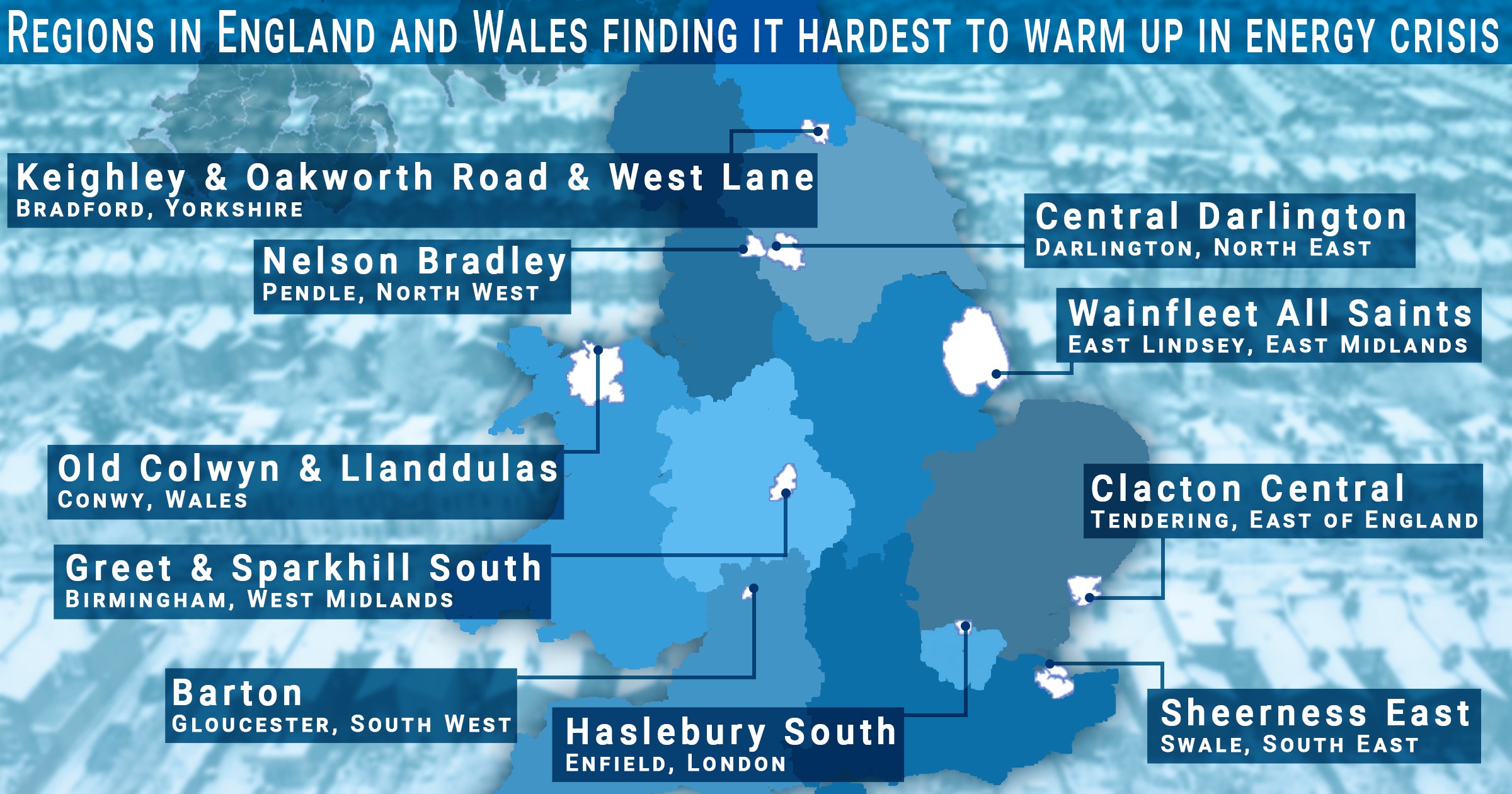 A new map has revealed some of the hardest to heat areas in regions of England and Wales.

Friends of the Earth has identified 100 of the ‘coldest neighbourhoods’ across the two countries.

Homes in each location are the hardest to heat due to low energy efficiency ratings – which makes energy use and bills higher than average.

Each neighbourhood also features a higher number of people living on low incomes.

Birmingham, Blackpool, Bradford, Bristol, County Durham, Enfield, Luton, Rhonda Cynon Taf and Swale have the highest concentrations of coldest neighbourhoods in England and Wales, according to the new data by Friends of the Earth.

As a whole, the UK has some of the worst insulated homes in Europe, making them expensive to heat as warmth escapes through walls, windows, roofs and doors.

Last month, a coroner said that the death of two-year-old Awaab Ishak, who died after ‘chronic exposure’ to mould created by damp in his home, should be a ‘defining moment’ for the UK’s housing sector.

Friends of the Earth, which fights for environmental justice, has also shared a series of evocative images and powerful stories from those impacted by soaring energy prices.

The organisation commissioned photojournalist Grey Hutton to visit some of these areas with a thermal imaging camera.

He met with families and individuals living in Rhyl in north Wales, Bradford and Halifax in Yorkshire and Enfield in London, where poorly insulated, heat-leaking homes are proving not just impossible to keep warm but are often riddled with damp issues and putting health and wellbeing at risk.

The photo series highlights how people of colour, disabled people, older people, and those living on low incomes are among those disproportionately impacted by the energy crisis.

Among those photographed were 48-year-old Thomas who lives in Rhyl.

He described ‘walking around like the Michelin Man’, wearing three pairs of trousers in his home to keep warm because he can’t afford to heat it, citing the standing charge on his pre-payment meter as a driving cause.

Meanwhile 78-year-old Audrey, who also lives in Rhyl and has a number of health issues, said that she lives in just one room of her home because it is the only way she can afford to stay warm.

One of the images starkly captures just how cold the tips of her fingers are because she struggles with poor circulation and arthritis.

People of colour are more than twice as likely to live in some of England’s coldest neighbourhoods, according to Friends of the Earth’s analysis.

Iqra, a 21-year-old living with her family in Bradford, spoke of the difficulty of retaining heat in her poorly-insulated home, which has created a terrible damp problem.

Her family gets by using hot water bottles and wearing thick socks and woolly clothing.

In one of the photos, Iqra, her mother and 7-year-old sister stand next to a wall saturated with damp, the heat of their bodies in sharp contrast to the dark cold of the seeping moisture.

The images collected showed that people are doing everything they can to try to stay warm and protect each other from the impacts of rising bills.

One heart-warming image from Foryd Community Centre in Rhyl, which offers a foodbank and a community café, shows how people are supporting each other.

The photos’ release marks the launch of United for Warm Homes, a campaign powered by Friends of the Earth.

United for Warm Homes is a growing alliance of community groups and individuals campaigning for the solutions that will bring down energy bills for good and cut the harmful emissions that cause climate change.

In England, Friends of the Earth is urging the government to commit to a free, nationwide, street-by-street programme of insulation and energy efficiency measures which is one of the quickest and most cost-effective ways to lower energy bills.

And in Wales, the group is urging the Welsh government to urgently introduce its new Warm Homes programme to help those most in need, and through street-by-street insulation in neighbourhoods.

Catriona Currie, warm homes campaigner at Friends of the Earth, said: ‘Harrowing stories like the ones captured in these striking photos are shamefully all too common right now.

‘We have millions of people facing an incredibly bleak winter ahead, and with the festive season right around the corner.

‘We’ve heard how people are making every adjustment they can to ease the enormous cost pressures they’re facing, and the cold is far from the only problem – damp issues are putting health and wellbeing at risk too.

‘No one should have to live in a freezing home, just so they can afford to pay for food or meet other rising living costs.

‘Rapidly rolling out a street-by-street scheme to insulate our heat-leaking homes, prioritising those in most need first, is one of the quickest and cheapest ways to bring down energy bills and cut harmful carbon emissions.

‘The UK government must not delay this essential action to keep people warm and well.’

Royal baby title: Will Meghan Markle’s son be a prince?

Does Russia report expose the truth – or ‘Russophobia’?